The road to Rose Meadow Way in Aquinnah is winding and quiet. It curves under canopied trees with blooming summer leaves, and water views that appear in and out of sight. The native up-Island colors host an energy, a spirit, a calm that’s hard to miss. Alan Slatas manages to harness it all in his 4,136-square-foot property.

Slatas built the main house in 2018 — it was about a two-year project. He built the guest house in 2008, and bought the land in 2006. The architectural design? Slatas. The interior design? Slatas. Builder? Slatas. He did partner with general contractor Vineyard Home Improvements, and West Tisbury’s P&P Masonry, but homes are a hobby for the now year-round Islander, and it’s evident Slatas pours his soul into them.

“I wanted to bring the outside in,” he said as he led me inside.

For those of you unfamiliar with this series, it was launched with the intent to simply feature interesting Island homes. The ones we’ve heard of, spotted, dreamed of, and can’t help but be curious about. Who lives there? What’s it like? What do they do? Alan Slatas was kind enough to let The Local inside to take a peek.

“I wanted to create a gathering space; notice how there’s no TV,” he said of the home’s living area, which blends seamlessly into the kitchen and dining room. The European white oak floors felt soft under my feet. They matched the driftwood-inspired kitchen table, chairs, and cabinetry, consistent throughout the open-floor concept.

Slatas has designed one other home on Martha’s Vineyard — a spot on Prospect Hill with designer Christine Lahiff. He lived there from 1999 to 2006. Slatas and Lahiff have also designed homes in Middleton, and several in Gloucester.

Everything is sleek and modern, but strikingly simple. “I didn’t want it to look like a new house,” Slatas said. He pointed out a light fixture that hung above the kitchen table. It was a bouquet of Edison bulbs. “I decided to go with something that made the house look like it’s been here for a while,” he said.

Art by his daughter, Devin, hangs on walls throughout the house. They’re bold linear canvases that command entire walls.

A small set of stairs leads up to the master suite, which is introduced with an elegant bathroom and closet area. Floor-to-ceiling windows envelop the steam shower.

“If you press that little button, steam fills up the entire shower,” Slatas said. “You can’t even see past your hand. It’s so nice.”

The master bedroom is simple and minimalistic, with more large, inviting windows. There’s plenty of empty space — Slatas likes to do yoga inside in the winter.

“I also did radiant heat on the floors, so when you walk in the wintertime, your feet are nice and toasty,” he said. He led us back across the living room, and down another small set of stairs.

“They call it a waterfall look,” he said of the stairs. “I wanted a more interesting, cleaner stair. I didn’t want moldings, and I wanted to keep with a nautical theme. My floor guy says it’s meant to look like it grew there. I’m really happy with how it came out.”

The downstairs level has two bedroom suites, a TV room, and a home office, where Slatas’ partner, Albert, was busy working during our visit. Slatas also works from home. He does business strategy consulting for CEOs. He splits his time between Martha’s Vineyard, New York City, Florida, and California.

Slatas led us back upstairs and outside. He showed us his spacious back porch that overlooks the Vineyard Sound, as well as the property’s 2.9 acres. The porch has stainless steel wire cabling, and automatic screens that slide down for buggy nights. We climbed a black, spiral, aluminium staircase to the roof deck.

“I wanted easy access, not to take up much space, and something that’s architecturally interesting,” Slatas said of the spiral staircase. “This will last forever.”

The guest house is a one-bedroom, one-bathroom, standalone unit. Electric blue paint with sponge-blot detail adorns the living space walls. The bedroom is essentially built into a window. “It really feels like you’re sleeping under the stars at night,” he said.

This was the house Slatas and his two daughters lived in every summer before the main house was complete. It’s linked to bittersweet memories, as Slatas’ younger daughter, Jillian, lost her battle with addiction in November 2017.

Slatas originally built the house to be a homestead for his family, kids, and future grandkids.

Circumstances change, and tragedy doesn’t discriminate, but Slatas already has his eye on another Island project. In the meantime, it’s another season on Rose Meadow Way, in the company of friends, family, and Aquinnah sanctity.

*This article has been updated to clarify design work on past projects.

Is there an Island home you’re curious about? Email brittany@mvtimes.com. We’ll see if we can make the connection and take a peek. 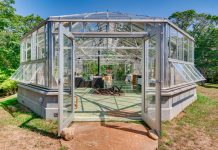 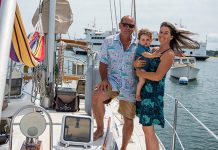 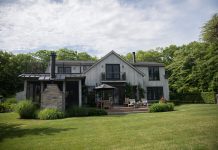