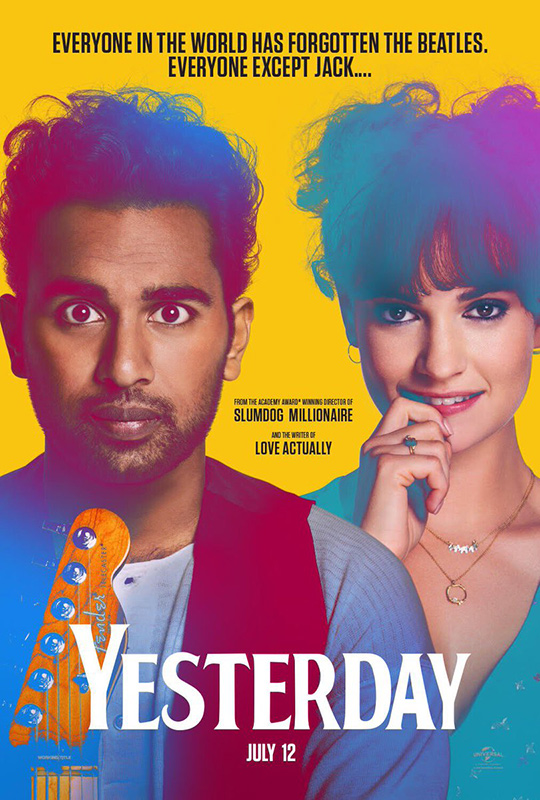 Believe it or not, the Beatles are coming to the M.V. Film Center in this weekend’s film, “Yesterday.” This rom-com fantasy posits a world where the Beatles, let alone their songs, never existed. Danny Boyle, who won an Oscar for “Slumdog Millionaire” (2008), directs, with a screenplay by Oscar nominee Richard Curtis, known recently for “Mamma Mia! Here We Go Again” (2018).

Previewed here because the film was not available for review, “Yesterday” follows the struggles of singer-songwriter Jack Malik, played by Himesh Patel (“Eastenders: E20”). Jack has been crooning unsuccessfully on the streets and in the bars around Suffolk, England, for 10 years, and he’s ready to throw in the towel. Then, through the kind of magic only movies can make, Jack gets hit by a bus, and the world inexplicably goes dark for 12 seconds.

When Jack wakes up the next day in the hospital, minus his two front teeth, he discovers he’s the only person left who remembers the Beatles and their songs. His best friend and part-time manager Ellie (also in “Mamma Mia! Here We Go Again”) gives him a guitar for consolation for his accident, and when he plays the 1965 Paul McCartney classic, “Yesterday,” for Ellie and their friends, they are mildly stunned.

Jokes abound around Jack’s dilemma. For instance, when Jack Googles the Beatles, only “beetles” turns up, along with red peppers for Sgt. Pepper. His rendition of “Let It Be” for his parents is a comic disaster. A few other things, like Coke, have also disappeared, but not the Rolling Stones or the Beach Boys. Should Jack own up to the fact that the songs he’s playing were created by the Fab Four? This is the dilemma that haunts him.

Playing himself, British rock star Ed Sheeran invites Jack to be the opener for his touring act. He also suggests changing “Hey Jude” to “Hey Dude,” challenges Jack to a singing contest, and eventually admits Jack is better than he is. His manager Debra (Kate McKinnon of “Saturday Night Live”) takes on Jack and heads him toward celebrity status, showering him along the way with plenty of sarcasm and potshots.

Ellie, who has carried a torch for Jack since she first heard him sing Oasis’s “Wonderwall” at a school talent show, gets lost in the shuffle. As Jack struggles with his newfound fame, he begins to question whether life with Ellie wasn’t better.

Two questions that research on the film suggests don’t get answered are how four musicians working together differs from a single one, and whether the way the Beatles revolutionized pop music continues to be relevant in the same way today.

Victoria Campbell’s poignant documentary about her family’s Vineyard home, “House of Bones,” returns to the Capawock Theater on Saturday, June 29, in a special event. The house had to be sold after the death of the family matriarch. “House of Bones” played on the Vineyard 10 years ago, and Campbell hopes to see if it stands up to the test of time. Campbell will lead a post-film Q and A.

Information and tickets are available for these and other Film Society films are available at mvfilmsociety.com. “Yesterday” is currently playing at Edgartown Cinemas as well.