By the time you read this column, it may be too late. Uncle Sam, the Samoyed, may have already eaten the remains of your barbecue and be barfing in the backyard. Or he may be cowering in the closet, quaking, as fireworks explode. If you’re lucky. If you’re not lucky, Sam may be so upset by the booming he has broken through your screen door and run off. Human celebrations all too often spell trouble for our four-footed friends.

Fireworks are beautiful, but they’re loud, and loud noises can trigger noise phobias in dogs. When Uncle Sam hears those big bangs, whether gunshots, thunder, or Fourth of July festivities, he gets anxious. It’s natural. It’s instinct. Sudden loud sounds often indicate danger, so any ruckus puts pups onto high alert. Some dogs just need a reassuring pat on the head, but many experience severe anxiety. Sam may hide, shake, pant, and pace. He may slink around, tail tucked, ears flat back against his head. He may dig holes in the couch, urinate or defecate in the den, destroy things. He may drool, refuse to eat, whine, bark, or howl. He’s trying to tell you he’s scared. He’s beyond scared. He’s having a panic attack.

Dogs with severe noise phobias have been known to do crazy things fleeing those terrifying sounds — sometimes fatal crazy things. Crashing through doors. Running into traffic. Jumping out windows. Why is Uncle Sam so scared, while Betsy Ross, the beagle, is totally fine with fireworks? It’s hard to know why individual dogs develop noise phobias. Events early in their lives may initiate the fear. Repeated negative experiences can reinforce it. There may also be a genetic component. We know this is true for anxious people, why not for dogs? Noise-phobic dogs are more likely to have other anxiety-related issues as well, such as separation anxiety.

What’s happening physiologically is an involuntary stimulation of his fight-or-flight mechanism. The sympathetic nervous system responds to the perceived threat by preparing Uncle Sam’s body to either fight or flee. Heart rate speeds up. So does breathing. Pupils dilate. Hair stands on end. If you were to draw blood and check his cortisol level ( a hormone the body produces when stressed), you would find it was double normal.

So what do you do if your Uncle Sam has noise phobias? Here are some basic environmental and behavioral steps you can take today. Limit his exposure to the scary stimuli the best you can. In other words, don’t take him with you to watch the fireworks. In fact, if you have a highly anxious animal, skip the festivities and stay home with him. Make home as quiet, predictable, and safe as possible. Stick to familiar routines. If he has a favorite place to hide, go with it. If he doesn’t have a “den,” make him one. A crate covered with a blanket. A large cardboard box big enough to crawl inside. Put it in an inside room, or the basement. Block out outside sounds by playing loud, rhythmic music, or using a “white noise” machine. You can even try a “thunder shirt” — a weighted dog coat that some people believe helps calm their pets.

Behavior specialists discourage a lot of petting and affection during anxiety attacks, saying Sam may interpret this as positive reinforcement for panicking. I’m not sure I agree. As someone who has the occasional panic attack myself, I think calm, loving reassurance is generally a good thing, for dogs and for people. For me, distracting myself is key when I feel anxious. Distraction may work for Sam as well. Try to get his attention with games or toys, but be cautious when you engage with him. Fearful dogs can occasionally display uncharacteristic aggression during these times.

Now let’s talk drugs. Our favorite dog owners are those who know their dogs are going to freak out, and plan ahead. Your veterinarian can prescribe short-acting antianxiety drugs or tranquilizers in advance. Prescription medications like alprazolam, dexmedetomidine, or trazodone. We can discuss the pros and cons, and help choose the right drugs at the right dosages for your dog. Oops. Did you forget Uncle Sam needed medication? Did it not occur to you until the neighborhood kids started setting off firecrackers, and the dog tried to dig a tunnel to China in your couch? Here’s the tired veterinarians’ adage: “Lack of forethought on your part does not constitute an emergency on my part.” I know. I should have written this column last week. Seriously. It’s not fair to expect your veterinarian to spend his or her holiday filling last-minute prescriptions for your dog. On the other hand, if you need advice, don’t go raiding your own medicine cabinet or relying on Dr. Google. Talk to a veterinarian. (I can’t believe I’m saying this, since I’m the Island veterinarian on emergency call this Fourth of July.)

Perhaps you’re reading this post-holiday. It’s all over but the leftover hot dogs. Uncle Sam has recovered his composure. But if he has noise phobias, he may well lose it again at the next thunderstorm, or at the sound of gunshots during hunting season. Make a long-range goal. Consult your veterinarian about desensitization and counterconditioning, the cornerstones of behavior modification. It takes a serious commitment to help an animal overcome fears, just like it does for people to do so. If training techniques are not enough, discuss long-term medications like fluoxetine or clomipramine. These may take several weeks to take effect, but eventually will reduce Sam’s overall anxiety. Then you just add short-acting antianxiety medications as needed for specific events or storms.

In 2015, Collecchio, a small town in Italy, passed legislation allowing only “silent” fireworks “as a way of respecting the animals and reducing the stress caused to them.” Apparently you can now get spectacular fireworks sans the big booms. I know America is the home of the brave, but not all our animals fit that description. Maybe it’s time we consider this option too? 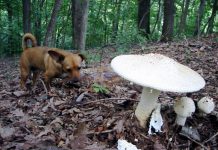 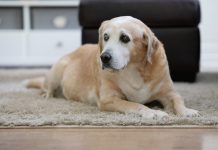 Visiting Vet: Belvedere is back on his feet 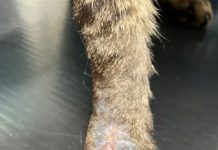