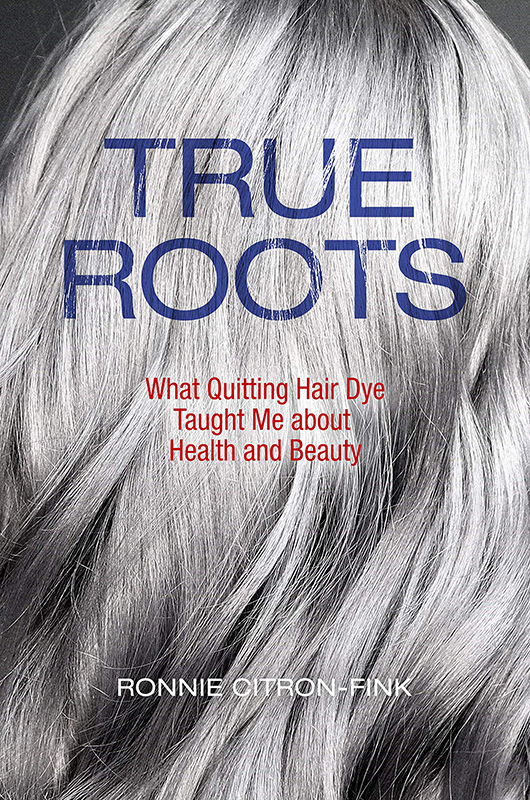 Some books, films, and documentaries offer a narrative that changes the way audiences perceive a topic. Take “Jaws,” for example — the 1975 film literally scared people out of the water. Or “Food Inc.” — a 2008 food and farm documentary, and essentially the reason I don’t eat meat. “True Roots” by journalist, environmental health activist, and seasonal resident Ronnie Citron-Fink offers a look at the American hair and beauty industry, and I’m not sure I’ll ever color my hair again.

Citron-Fink’s story began when she decided to let her hair go gray. She’d been dying it almost black for over 20 years.

“It was very labor-intensive,” Citron-Fink told The Times. “I needed more and more color.”

She frequented the salon every few weeks, and applied DIY box dye to upkeep the roots in the interim. Citron-Fink also works in the environmental field as the editorial director for Moms Clean Air Force, an advocacy group of over a million mothers who push for national and local policy around climate change, pollution, and chemicals to protect children’s health. Citron-Fink attended a toxics reform meeting in Washington, D.C., about five years ago.

“We looked at the toxic chemicals in personal care products, and the body burden of the buildup of these toxic chemicals,” Citron-Fink said. “I looked around the conference room and saw colleagues whipping off their lipstick, peeling off their nail polish, and I felt my scalp tingle.”

Citron-Fink asked a scientist in the room, “Is hair dye toxic?” When she was told yes, and that understanding it goes beyond the landscape of science and law, she’d spend the next five years researching the health implications of hair dye, and transitioning to her natural silver.

“It was the tipping point for me,” Citron-Fink said. “I had cleaned up the rest of my beauty act: changed my makeup, careful about the products I’d put on my body. The last thing that needed cleaning was my hair.”

Many dark dyes carry the chemical paraphenylenediamine (PPD), which contains coal tar and petroleum. “I had no idea I was putting coal tar on my head,” Citron-Fink said. “And here I am, the environmentalist.”

But it’s a tough transition to make. Decades-old advertising, television, and mainstream media leads many to believe going gray equates with age and invisibility.

“A billion-dollar beauty industry perpetuates this. We’ve been getting these subliminal messages from media outlets all our lives,” Citron-Fink said. “I was concerned, especially working in the environmental field — it’s a relatively young profession.”

Even more concerning, though, is what chemicals in hair dye can do to long-term health. Citron-Fink investigated a population interacting with hair dye most — hairdressers.

“Who’s looking out for us?” asked one of the hairdressers in Citron-Fink’s book.

“People think, ‘This is America. If it’s on the shelf, it must be safe,’” Citron-Fink said. “Unfortunately, that’s not the case.”

And America’s behind the wave. According to Citron-Fink, 40 countries have banned or restricted 1,400 chemicals included in hair dyes. “By comparison, we’ve only been able to restrict 11,” she said. “And under the current administration, we’re not seeing a bump in the FDA budget to deal with this.”

So what can we do? “If we boycott certain products, manufacturers will figure out a way to make them differently,” Citron-Fink said. “It’s all about the bottom line.”

Citron-Fink listed some natural alternatives, including semi-permanent toning, henna, and highlighting, which have fewer health implications because dyes aren’t going straight into the scalp.

“To get through all my beauty angst about going gray, it really helped me to write this book and weave in my story,” Citron-Fink said.

Citron-Fink lives in the Hudson Valley year-round, but started spending summers on Martha’s Vineyard about 30 years ago. “We never missed a year,” she said. She wrote the majority of her book on the Island, through Noepe writers’ residencies programs and a winter caretaking a home up-Island. The book hit bookstore shelves in early June. “True Roots” intertwines health, beauty, marketing, politics, science, and environmental activism, offering something for everyone.

Citron-Fink will be a panelist at this year’s Islanders Write conference on Monday, August 12, at Featherstone Center for the Arts in Oak Bluffs.