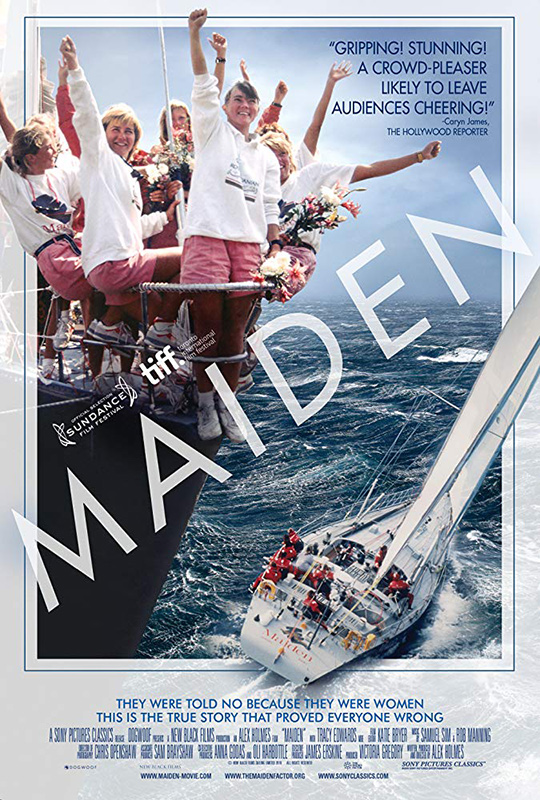 A documentary about the first all-women round-the-world sailing crew, “Maiden,” arrives at the M.V. Film Center on Friday, July 12. The Maiden competed in the Whitbread Round the World Yacht Race in 1989. The film’s a must-see for the Island’s sailing community, and for anyone else interested seeing a women’s crew take on the then-sexist world of yacht racing. Directed by Alex Holmes, the film is co-sponsored by Sail MV, and Maiden skipper Tracy Edwards will participate in a postfilm discussion by Skype on Friday.

The Whitbread Round the World Yacht Race (now known as the Ocean Race) departs from European ports, typically in October. Established in 1973, the race is scheduled every three years, and lasts up to nine months; it covered 33,000 nautical miles in 1989-90, the longest such event on earth.

“The ocean’s always trying to kill you,” says Edwards at the opening of “Maiden.” “It doesn’t take a break.” Her English childhood changed at age 10 when her father died. Her mother remarried, and the family moved to Wales. With an abusive and alcoholic stepfather, Edwards developed into an angry teenager, suspended from school 26 times, and eventually leaving home. After landing in Greece, she was hired as a yacht stewardess, then took a job as a cook in a nautical world where there were four “girls” out of 230 crew members. “I was treated like a servant,” she says. “The cooking was horrendous; I loved the sailing.” After reading a book about the Whitbread race, Edwards says, “I wanted to be part of it. It was something I had to do.”

She announced at the Southampton Boat Show that she planned to form an all-female team for the race.

After spending two years hunting unsuccessfully for corporate sponsorship, she reached out to Jordan’s King Hussein I, whom she had met in the U.S.  Hussein, who had encouraged her to assemble an all-female crew, helped arrange funding through Royal Jordanian Airlines. Edwards was undeterred by comments like calling Maiden “a tin full of tarts,” and ridicule from both the yachting world and the media. Describing each leg of the race, “Maiden” shows how Maiden won two legs to come in second in its class. In 2014, Edwards raised funds to rescue Maiden, which she found had been abandoned, and the boat is being used to raise funds for girls’ education. “Maiden” makes a compelling story of Edwards, her crew, and the race that nobody expected them to complete. The surprise is how long it took to make it.

Information and tickets for “Maiden” and other films at the Film Center, the Capawock, and the Strand are available at mvfilmsociety.com. Films playing at the Edgartown Cinemas are available at entertainmentcinemas.com/locations/Edgartown.