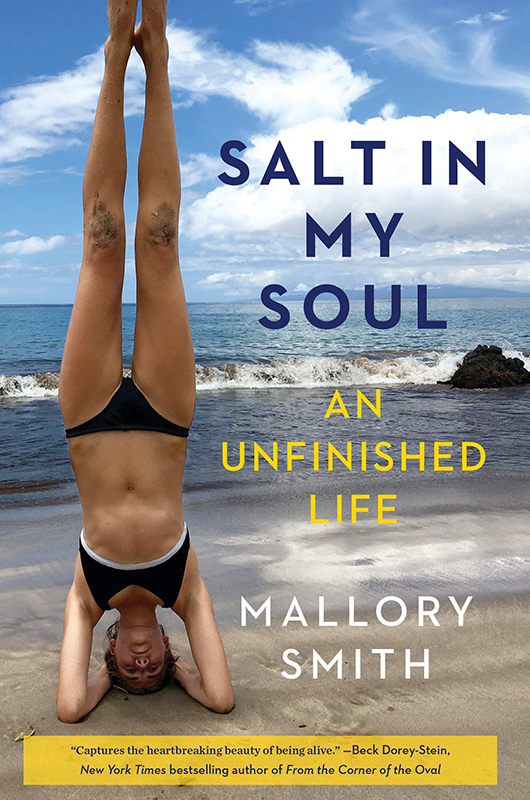 I was immensely moved by Mallory Smith’s memoir, “Salt of My Soul: An Unfinished Life,” 10 years of intensely honest journal entries from ages 15 to 25, when she died from cystic fibrosis. While outwardly always optimistic with those around her, Smith writes of her hope, despair, and aspirations.

In cystic fibrosis (CF), a defective gene causes the production of thick, sticky mucus that builds up in the lungs, pancreas, and other organs, causing problems with the respiratory, digestive, reproductive, endocrine, and other systems. The vicious cycle of infection, inflammation, and scarring resulting from the combination of this viscous mucus and ineradicable bacteria inevitably leads to respiratory failure.

The severity and complexity of Smith’s health challenges is astounding. In just one example she writes, “This January will be remembered as the month of 10-ish bouts of serious hemoptysis, worsening and severe anemia, one blood transfusion, three rounds of immunoglobulin therapy, two doses of fresh frozen plasma, two bronchial artery embolizations, large hematoma, severe pleuritic lung pain, around-the-clock-opiates and nausea medication, vomiting, an inability to eat for two weeks, two bronchoscopies, two CT scans, many X-rays, discussion of transplant, two stints in the ICU, five hospital rooms, and over a dozen caring and brilliant doctors on my case.”

What is amazing is that in between times of extreme debilitation, Smith was vibrantly active — an athlete who loved, among other things, beach volleyball, swimming, and the thrill and freedom of surfing. It wasn’t just physical activity she pursued with passion. Despite countless hospitalizations, Smith graduated Phi Beta Kappa from Stanford University, and worked as a senior producer at Green Grid Radio, and as a freelance writer and editor specializing in environmental issues, social justice, and healthcare-related communications and more.

Smith’s desire to live a vital, active life leaves her in a constant quandary, as she writes: “I am on a perennial quest to find balance … I feel like I’m a fly caught in a spider’s web, and the more I struggle to get free, the more tightly I’m trapped and the more quickly I accelerate my demise. The web is CF, but it’s also my own emotions about growing up, changing, facing the disease with dignity. It’s the difficulty of finding balance between being carefree and being responsible. It’s learning how to treat the disease with the respect it deserves without making it the focal point of my life, ruining my personality, or allowing it to drown me.”

Another such sentiment: “Instead of trying to enforce health as a New Year’s resolution, I will try to enforce an unwavering embrace of the messy, impermanent, underrated present.” But here just six days later can be her “present” when writing about the chest pain that is a regular part of her symptom list, usually correlating with pneumonia, “The pain that comes is so severe, I can’t do anything — can’t think/breathe/move/sleep because there’s no way to ignore it. It makes me curl up into a hunchback, trying to take shallow breaths so I won’t feel the pain.”

Even when her body isn’t under attack, her life is far from normal. Smith spent endless hours in daily care with inhaled medications to thin the mucus, chest percussion therapy to exercise and loosen it to bring it up, along with IV antibiotics, pills, and yoga for her mind and body — and always writing as a way to vent time and with friends to nourish her soul.

Throughout we witness the deep emotional bonds she forms with others, including her family, whom she loves dearly and who play a key role in her survival. Smith writes more than once, “I preemptively ache and grieve for [them], knowing that one day they will probably have to bury me.”

She also makes close friends, those with CF and many without. Although she despaired of ever having a relationship, she indeed ended up in one that was profoundly loving, and the young man, Jack, stayed steadfast all the way to the end.

Mallory held out as long as possible, and eventually, despite enormous medical and political odds, got a lung transplant. We also learn of the irony of the small window in which CF patients are even considered for this dangerous operation, for which you have to be sick enough to not be able to live without new lungs — and yet well enough to likely survive the extreme procedure.

By this time, I had become so invested in Mallory’s remarkable journey that I rode the rollercoaster of emotions through her operation, immediate painful aftermath, complications that ensued, and last-ditch efforts at the very end. I got teary as Diane Shader Smith, Mallory’s mother, writes of her last moments, even though I knew of her ultimate death from the first page.

Crucially, trust me, “Salt of My Soul” is not a depressing book, but rather beautifully moving. How could you not feel so reading such contemplations as, “I don’t want unwavering happiness … I want perspective. I don’t want to numb the experience of pain. I want to be resilient. I’m not an inspiration. I’m just a person, grounded in compassion, striving to achieve empathy, and wanting to make my way with goodness and grace.” Toward the end, one of Smith’s entries perhaps exemplifies her far-too-young-gained wisdom: “I feel like people with CF are privy to secrets it takes most other people a lifetime to understand. How lucky we are to be alive. How lucky anyone is who has their health … That we can leave behind a legacy when we go that will impact others … That love and happiness are the most important things to strive for … CF has given me a value system, and ultimately, no matter how hard it is, I’m grateful for it.”

“Salt in My Soul: An Unfinished Life” by Mallory Smith, Spiegel & Grau: New York, is available at Bunch of Grapes in Vineyard Haven and online. The author’s mother, Diane Shader Smith, will talk about the book and her daughter at the West Tisbury library on Saturday, July 13, at 1 pm.

Build your own Built on Stilts performance