The Martha’s Vineyard Sharks thumped the host New Bedford Bay Sox 13-2 Tuesday night at Paul Walsh Field to earn their eighth straight win. With that, the Sharks are tied with the Mystic Schooners atop the New England Collegiate Baseball League (NECBL) Southern Division standings at 16-9. As The Times went to press Wednesday, the two teams were scheduled to play at the Shark Tank. See mvtimes.com for results.

The Sharks took a commanding 9-0 lead after two innings, and banged out 13 hits on the night. Michael Knell led off the six-run second inning by belting the seventh pitch of his at-bat over the fence for a home run. Matt Chamberlain added a three-run dinger, and Dylan Lutz, who was 3 for 5 in the game, hit an RBI single. The Sharks added two runs in the fourth and two in the eighth before the Sox got on the board.

Izaiye Mestre started on the mound and earned the win, allowing four hits, striking out five and walking none in six scoreless innings.

Sunday night in Oak Bluffs, the Sharks grounded the Newport Gulls 5-1. Will Warren pitched his final game of the summer and picked up his second win with another strong start on the hill, giving up one run on seven hits, while striking out six and walking two in seven innings. Warren, having reached his limit for innings pitched, will head back home to Mississippi and return to Southeastern Louisiana University.

The Sharks did most of their damage in the second inning; first with their gloves, then with their bats. In the top half of the inning, second baseman Rudy Aguilar and left fielder Alan Burnsed each made diving catches to thwart the Gulls at the plate. They both hit doubles later. In the home half of the second, Anthony Videtto led off with a walk, Josh Spiegel doubled, and Brady Slavens reached first on an error. Matt Chamberlain singled and made it all the way to third on an errant throw, clearing the bases for a 4-0 Sharks lead.

The Sharks began the weekend with a bang in a Saturday night slugfest at the Tank. Anthony Videtto hit a three-run, walk-off homer as MV rallied from a 13-8 deficit, scoring eight runs in the ninth to stun the Danbury Westerners, 16-13. 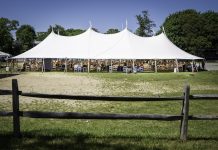 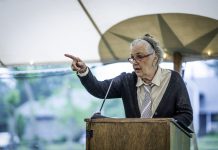 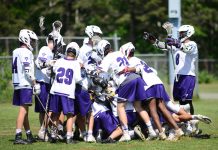