Judith Lynn Green of Oak Bluffs died on June 5, 2019, at Brigham and Women’s Hospital, surrounded by her family. The cause was acute respiratory illness. Despite her severe 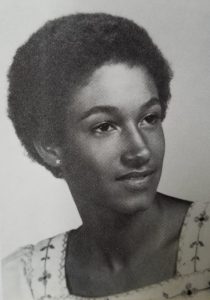 illness, she did not stop talking, triggering laughter and asking for coffee and sandwiches. The medical staff who cared for her in her last days were immediately enamored of her chatter and charm.

Judy was born in 1959 in Meriden, Conn., to Bettylou Beatrice Mokoski and Arthur Lee Green. She graduated from Manchester High School in Connecticut in 1978. After spending happy childhood summers in Chilmark, Aquinnah, and Oak Bluffs, she decided to move to the Vineyard following graduation. Judy worked at a local bank, and then as an assistant teacher at the Tisbury School before establishing herself as a preschool teacher at the Martha’s Vineyard Hospital daycare center, and then at the Community Services Early Childhood Program. She had particular philosophies on raising and teaching toddlers, none of which she kept from her daughter, or anyone she thought could use some help. Consistency and structure were the backbone of her values, and how she raised her beloved daughter, Emma.

The Island was her home. Judy spoke nostalgically about summer days on Lucy Vincent Beach and on the docks of Menemsha. In her adult years, she spent many summer evenings squidding from Memorial Wharf in Edgartown or casting off State Beach. Judy also loved to kayak, garden, and cook for those she cared about; the longer it took to prepare, the more she liked you. She loved to talk about her daughter Emma, and since 2017, her grandson Odin, who called her Yaya. They shared a very special bond.

Judy will be remembered as being pure of heart, kind, forgiving, and inclusive. She did not judge, and she always gave second chances. She measured others not by the mistakes they made but by the intentions in their heart. She displayed a sincere empathy for humanity that the world, these days, is in desperate need of.

She is survived by her daughter Emma Green-Beach, grandson Odin, and son-in-law Isaiah Scheffer of Oak Bluffs; her sister Susan Kitchens, brother-in-law Mike, and nieces Olivia and Claire, of South Windsor, Conn.; her brother Adam Green of Watertown, and his children Trevor and Tiana of New Bedford, Adam, Christian, and Taylor; her brother Arthur and sister Adrian of New Jersey; and by her longtime partner and friend, Corly Maciel. She was predeceased by her parents and by Emma’s father, Warren (Sandy) Beach.

A celebration of Judy’s life will be held on State Beach at the end of the summer at a date to be arranged. Please bring your fishing pole, beach blanket, and favorite dish to share. Donations may be made in her memory to the recreation program of Windemere, or to Island Health Care.