Martin Leslie Berger, a longtime resident of Edgartown, died this week from complications following a stroke suffered earlier this year. Martin was 87 years old when he died at his 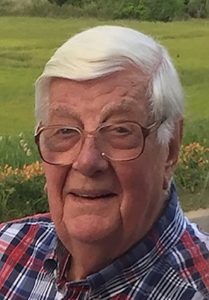 home on South Summer Street in Edgartown, surrounded by friends and family, including his two sons and his wife of 61 years, Carole.

In the fall of 1975, Martin and Carole accepted an invitation from their close friends Jim and Hilly Luther to come to Edgartown for a weekend of striped bass fishing aboard Jim’s SeaJay. The bountiful fish, the beautiful village, and the warm people were all it took. The next spring, with the help of his friend Steve Gentle, Martin bought a summer home on Fuller Street that he would enjoy with his family for years to come. He often described that decision, to make Edgartown his summer home, as the best decision he ever made.

When he retired in 1986, Martin and Carole made Edgartown their full-time home, where they spent almost 20 years in a captain’s house on South Water Street. Last year they downsized to their home on South Summer Street facing the Federated Church, whose bells and hymns have served as peaceful background music to Martin for decades, and were especially soothing to him in his final days.

More than anything, Martin enjoyed social interaction and friendly banter with his broad group of Island friends. Walking down the Reading Room causeway to lunch, he could be heard calling out to our town poet laureate sitting atop his work barge, “Hey Steve, when did they let you out of jail?” Every Saturday for years, Martin rose early to get breakfast at Linda Jean’s with his good friends Jeff Norton, Joe Solitto, and Paul Thoutsis. His Friday afternoon lunch group at the Harbor View Hotel call themselves the Bad Boys, but that was always a misnomer.

Martin was born in 1932 in Danzig, a Baltic port city that had been turned into a free state administered by the League of Nations following World War I to serve as a buffer between Germany and Poland. He was the sole son in a family of Anglo-German industrialists who owned and operated a large soap factory, Berger Seifen, which used the underwings of biplanes painted in phosphorous paint to advertise their products. Martin was raised speaking German, Polish, and English, but above all was endowed by his parents with the maxim that “manners maketh the man.”

In 1937, with Germany clamoring for reunification with Danzig and the clouds of war re-emerging, Martin’s father abandoned the family business and relocated his family to Leamington Spa in Warwickshire, in the English Midlands. Martin attended Downside School, where he played cricket and earned an academic scholarship to Trinity College, Cambridge University, where he studied history. His passion for history stayed with him for life, and his ease and interest in discussing matters ranging from Viscount Slim’s Burma campaign to the Crusades or modern politics never left him.

Before attending Cambridge, Martin served in the British Army, rising to the level of lance corporal in the Royal Army Service Corps, where he was posted to Frankfurt in postwar occupied Germany. He often said that his main contributions to the British Army were his ability to speak German and as a fast-pace bowler on the regimental cricket team.

In 1955 Martin started his commercial life with the Pan American Trade Development Corp., a privately held, Brussels-based international trader of building materials, including steel and cement. Shortly after joining PATDCO in Brussels, Martin sought after and was posted to New York. Assessing the prospects for building a commercial career, he felt that the opportunities in the U.S. outweighed those in Europe, so in 1957 he crossed the Atlantic on the Queen Mary and restarted his career. In New York he initially shared an apartment with Henri LaMothe, a circus performer who jumped from great heights into shallow pools of water.

Shortly after arriving in America, Martin accepted an invitation from his cousin to visit her in Danbury, Conn., and to meet her neighbor, a tall, attractive young lady named Carole, then a nursing school student. They never separated. Marrying in 1958, Martin and Carole began their long journey together. It started with putting a few pounds on Martin, who was 6 feet, 7 inches, tall and weighed only 165 pounds at their wedding. Their journey included relocating to Detroit, where Martin sold nails across the Great Lakes region, followed by Tampa, Toledo, and Philadelphia, as Martin built his career operating steel warehouse and distribution centers, and in the process became one of the largest importers of foreign steel into the country. Discussion over the family dinner table in the 1970s to the 1990s was a window into the demise of the U.S. steel industry as a global competitor. It was also where Martin shared a useful adage about overcommitment and underperformance that has stayed with his family: “You can’t put 10 pounds of nails into a five-pound bag.”

Martin and Carole enjoyed a full life together that included travels to Europe and Asia, and sailing in the Caribbean. As much as he enjoyed dining out, his preference was always for Carole’s gourmet home cooking.

Throughout his life Martin enjoyed participating in clubs and social organizations. At university he joined the Trinity Field Club, and wore their scarf throughout his life. In Philadelphia he was elected president of the English Speaking Union, which kept him in touch with other Anglophiles there. But his fondest association was with the Edgartown Reading Room, where he served as house committee chairman, president and most recently as honorary life member. The friendships he formed at the Reading Room were a great source of enjoyment in his later years.

Martin and Carole’s journey included two sons, Geoffrey and Stephen, who also maintain close ties to Edgartown. In addition to his wife Carole and his sons, Martin is survived by his daughters-in-law, Dana and Sarah, and five grandchildren, Christina, Emily, Helen, William, and Anderson.

A graveside service at the new Westside Cemetery in Edgartown will be held at 4 pm, Saturday, July 27, with a gathering to follow at the Edgartown Reading Room. Donations can be made to the Martha’s Vineyard Hospital at mvhospital.com/charitable-giving/donate.