There’s another new pastor on-Island; the Rev. Hyuk Seonwoo comes to Trinity United Methodist Church in the Campground from Warwick, R.I., where he served at Zion Korean United Methodist Church, an intercultural congregation, for the past 18 years. We had an email chat so that I could better introduce him to you, and for the sake of my own curiosity. He wrote that from 2015 to 2019, he also worked with the Rhode Island State Council of Churches, serving as a governing board member and a vice president. As far as his seminary experience, it’s a pretty impressive list: Graduate Division of Religion at Drew University (Ph.D. in Liturgical Studies), Harvard Divinity School (Th.M.), Boston University School of Theology (M.Div.), Methodist Theological  Seminary in Seoul, Korea (B.Th.)

Born in Seoul, Korea 54 years ago, Reverend Seonwoo wrote that his call to ministry came from a desire to find a more “meaningful life.” “I met many retiring/retired people who shared their feelings of emptiness and purposelessness,” he wrote. “After being discharged from the Korean Air Force, I attended the Methodist Theological Seminary in Seoul, Korea, that I considered a good place to begin a journey in search of meaningful life. I eventually found that it was God’s call to ministry as I continued my journey in Korea and the USA.”

Trinity United Methodist Church is active in providing community suppers in the winter, sewing clothes for children in Africa, and providing assistance to families on the Vineyard through its many programs. I asked Reverend Seonwoo what he was looking forward to most at his new church. “I hope the UMC-MV continues to participate in community outreach without losing its sense of community,” he wrote. “As we worship together every Sunday (during summer July-August at 11 am), we welcome and invite all to participate in worship more actively with differing gifts, abilities, and cultural backgrounds. I prayerfully hope that the UMC-MV continues to unpack and reflect on who we are, and whose we are, in God’s loving presence.”

As with any new assignment, there’s a period of transition that takes place. He’s getting to know the congregation and they are getting to know him. Right now, he wrote, he is in the process of “listening, learning, and loving.”

One of the gifts Reverend Seonwoo brings to the Campground church is that he is a Tai Chi instructor, and he plans to bring the mind-body practice to the community with a beginners class in September and October, with a little taste of the practice in August.

“I taught and demonstrated Tai Chi in church and community settings such as Westbay Community Action in Rhode Island, as well as some colleges (Brown, BU, and Yale),” he wrote. “We plan to offer a one-month trial (‘foretaste’) class, which will be held in August every Wednesday at 4 pm at the Parish House.” I wondered if practicing Tai Chi added to his spiritual life. “Once you learn the gentle, slow, and graceful movements of Tai Chi alongside the basic, cyclical rhythm of ‘loosen-empty-push,’ you can apply the Tai Chi principle to your daily lives,” he wrote. “The rhythm of loosen-empty-push is continual interactions between potential energy and kinetic energy, or it can be called ongoing flow between yin and yang. I call the same rhythm the rhythm of creation, because it is embedded in every natural movement: for example, just like the motion of a frog jumping, in order to jump high, we should sit (‘loosen’) and momentarily, sit again (’empty’) before jumping high in an upward motion (‘push’). Whether it is the frog jump or Christian life and ministry, repeated efforts of pushing only (push-push-push) could result in minimal outcomes.”

His last line really hit home for me, especially during the summertime when it feels like everyone I know is doing some form of push, push, push. Reverend Seonwoo said that Tai Chi and other exercises are important parts of stewardship, which is “our faith response to God in all areas of life and time.”

I asked about his family, and he wrote that his wife Younglang taught Korean language at TIMES2 STEM Academy, a charter school in Providence, R.I., in 2018, and that she also volunteered to teach Korean language at Rhode Island Korean School for the past 10 years. He has two sons, Eunki, who will be a senior in college, and Hyunki, who will be a ninth grader this fall. Hyunki has joined the Vineyard Haven Band and plays clarinet.

It sounds as if Reverend Seonwoo and family are a wonderful addition to the community, and I hope to meet them in person soon. Maybe at a Tai Chi class.

The Federated Church offers its annual Edgartown House Tour and Tea on Tuesday, August 13, from 1:30 to 4:30 pm this year. Tickets will be available the day of the event, for $40 each, beginning at 1 pm at the Federated Church Meetinghouse at 45 South Summer Street. Historian Mary Jane Carpenter will make a presentation about the history of the homes on tour at the Federated Church Meetinghouse at 1:30 pm. Guests will then visit homes in the South Water Street area of Edgartown, with the event happening rain or shine. Parking is available at the Edgartown School parking lot. This is one of the church’s biggest fundraisers of the year. For more information, call Anne Vose at 508-627-7077.

Everyone is invited to join the combined Island Episcopal congregations of Grace, St. Andrew’s, and Trinity as they celebrate Evensong and commemorate the lives and legacy of the Rt. Rev. John Burgess and his wife Esther on Sunday, August 4, at 4 pm at Trinity Episcopal Church in Oak Bluffs. The Rev. Mark Bozzuti-Jones of Trinity Church Wall Street will be the preacher and celebrant, and La Verne Mitchell, warden of Trinity, will be soloist. Refreshments on the lawn will follow the service.

Rev. Burgess was the 12th bishop of the Episcopal Diocese of Massachusetts and the first African American to head an Episcopal diocese. He and his wife retired on the Vineyard and worshipped at Grace Church. I wrote about the Burgesses a year ago:  Esther was arrested while trying to integrate a St. Augustine motel in 1964 along with another Boston woman, Mary Peabody, mother of then Massachusetts governor Endicott Peabody. Grace Church honored Bishop Burgess with the dedication of a stained-glass window with his likeness in 1999. Now they’ll honor him with a special night of praise and worship. 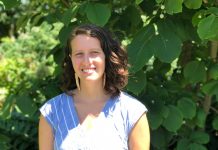