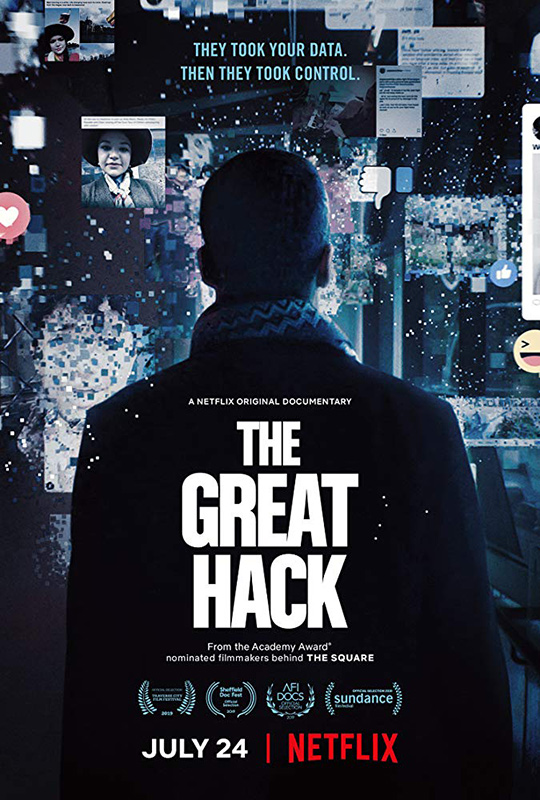 “The Great Hack,” Netflix’s new documentary, comes to the M.V. Film Center on Saturday, August 3. It plays like a fact-based cross between a thriller and a horror film, and should be required viewing for high school and college students, as well as the rest of us. A panel discussion will follow with information technology author Shoshana Zuboff, film producer and Vineyard Haven resident Nina Flalkow, Guardian and Observer journalist Carole Cadwalladr, Oscar winner for “Born into Brothels” and Vineyard summer resident Geralyn Dreyfous, and poet and Vineyarder Jorie Graham.

Describing the rise and fall of Cambridge Analytica, the British data mining and strategic communication company, “The Great Hack” investigates how this company worked to influence the outcome of the 2016 U.S. presidential election, as well as Brexit in the U.K. Cambridge Analytica was founded by conservatives Steve Bannon and Robert Mercer. The film focuses on three individuals involved with Cambridge Analytica.

Ignore the film’s visually striking but slightly confusing start at Nevada’s Burning Man festival, where a virtually unrecognizable Brittany Kaiser appears. More important, the viewer meets David Carroll, a professor of digital media at Parsons School of Design. Carroll asks his students if they are on Facebook, and if they realize the website is collecting data on them. “We are the commodity,” he warns them. Carroll has filed a suit against Cambridge Analytica’s parent company, Strategic Communications Laboratories, demanding they provide him with the data they have on him.

Cambridge Analytica claimed to have gathered 5,000 data points on every American voter through Facebook and other platforms. They used it to build psychographic profiles — the study and classification of people according to their attitudes, aspirations, and other psychological criteria, particularly in market research — of potential voters. They first practiced the effort in other countries, including Lithuania, Romania, Kenya, and Ghana. In Trinidad and Tobago they initiated a campaign to persuade young citizens not to vote, affecting the outcome of the election. The Obama campaign pioneered the use of data to target potential voters, but Cambridge Analytica mined data for the Trump campaign without permission, and sent potential voters, or “persuadables,” right-wing, nonfactual propaganda.

Two former Cambridge Analytica employees, now whistleblowers, are interviewed. Brittany Kaiser began as an unpaid intern for the Hillary Clinton campaign, then joined C.A. for three and a half years as a paid director of business development. After working on the Trump campaign for Cambridge Analytica, which spent $1 million per day on Facebook ads, she decided that what the company was doing was illegal. They knowingly misrepresented the truth, according to Kaiser. Christopher Wylie, the other whistleblower, called Cambridge Analytica “a full-service propaganda machine.” British journalist and Pulitzer Prize finalist Cadwalladr, who will participate in the post-film Q and A, broke the Cambridge Analytica story in the Guardian, and in a TED talk told tech billionaires they had broken democracy.

An investigation of Cambridge Analytica’s unethical practices was undertaken by British public service Channel 4 starting in 2017. CEO Alexander Nix told a Channel 4 undercover reporter that the company used bribery stings and prostitutes to discredit political opponents in Sri Lanka. Cambridge Analytica shut down in 2018, but other data mining companies continue to operate.

Five documentaries will play at the Film Center from Monday, August 5, to Friday, August 9, in collaboration with HBO. The lineup starts with an opening reception and “Pavarotti” on Monday, and special guest opera singer David Behnke will perform before the film. Directed by Oscar winner Ron Howard, “Pavarotti” includes interviews and performances by the opera legend. Tuesday brings Aviva Kempner’s latest film, “The Spy Behind Home Plate.” Jewish baseball catcher Moe Berg had a double life as a spy for the U.S.’s Office of Strategic Services, uncovering information about the Nazis’ atomic bomb program. Kempner will attend the screening.

The role of religion in the lives of the LBGTQ community is the subject of “They Know Not What They Do,” playing Wednesday. It examines how the conservative right tries to pre-empt the Bible and the Constitution, and looks at the effects of conversion therapy. Director Dan Karslake will attend. On Thursday, “The 5th Dementia” describes how a group of individuals with Alzheimer’s, dementia, and Parkinson’s play music and sing together in a band, and director Serene Meshel-Dillman will attend. Producer Peggy Drexler brings her film “Mike Wallace Is Here,” to close the series on Friday, with friends of the celebrated journalist also attending. This documentary considers both the good and bad aspects of Wallace’s reporting style.

Information and tickets for “The Great Hack” and Documentary Week films, as well as others at the Film Center, the Capawock, and the Strand are available at mvfilmsociety.com. Information about films playing at Entertainment Cinemas in Edgartown is available at entertainmentcinemas.com/locations/edgartown.

Art from the heart