Doris Aloha Long, known to most as Aloha, and Mimi to her grandchildren and great-grandchildren, passed away peacefully in the home she loved, her cottage in the Campgrounds in Oak Bluffs on June 15, 2019. She was 84. She had an indomitable spirit and a thirst for adventure, along with so many talents it is difficult to list them all. 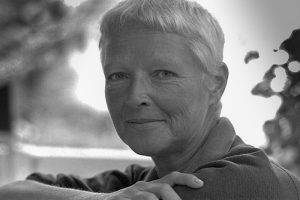 She was born in Beverly on Jan. 27, 1935, where she worked as a lifeguard on the South Shore of Boston and came by her lifelong love of the ocean. Aloha completed two years of college at the University of Massachusetts, Amherst, where she met and married her husband, Gordon “Gordy” Long on Dec. 26, 1954. They were together until his death in 2015.

She and Gordy raised their two children in Wilbraham, where they cultivated a close-knit group of friends who remained close over decades. Aloha was a self-taught gourmet chef and a talented artist (both a sculptor and a painter); she upholstered her own furniture, made her own drapes; purchased, refinished, and resold antiques. Aloha was an avid gardener, and began cultivating hybrid daylilies. Her gardens in Wilbraham were well-known for their beauty, which paved the way for her career later on the Vineyard. Aloha and Gordy purchased a cottage in the Campgrounds, in Oak Bluffs in 1974 after being introduced to the Vineyard by Gordy’s business partner whose family had a cottage there. For Aloha, it was like coming home. She never wanted to leave, and often her plumber had to be the one to tell her it was time to shut the water off or the pipes would freeze. Over the course of time, Aloha spent more and more time on the Vineyard, gardening, bicycling, fishing, clamming, scalloping, and even spending two summers swordfishing on the Peggy A with Alton and Steve Tilton.

Her love of gardening drew her to Heather Gardens and Donaroma’s Nursery, where she worked for many years, forging close relationships with many, particularly Roberta and Kevin Hearn of Heather Gardens. In fact, Roberta and Aloha traveled to France together on a bike tour in Provence, France, when she was 63 years young! She and Gordy had become avid cyclists, spending at least a month each winter in Naples, Fla., and bicycling everywhere they could. After Gordy retired in 2004, Aloha and Gordy sold their home in Wilbraham and had their Campground renovated and winterized, permanently relocating in 2004. They loved everything about the Vineyard and the Campgrounds. They both became immersed in the Campground community, serving on boards, designing, installing and maintaining the Tabernacle gardens, and participating in the many Campground activities throughout the summer. Illumination Night in the Campgrounds was a family affair, with four generations along with family friends enjoying a gourmet meal before lighting the lanterns and relaxing together on the porch while the grandchildren, and later the great-grandchildren, played in the yard. Aloha was quoted in an article about Illumination in a 2004 edition of the Vineyard Gazette as saying living in the Campgrounds was “Heaven on Earth”.

Aloha was predeceased by her husband, Gordy, and her sister, Frances Adams Douberly. She leaves behind her son and daughter-in-law, Ray and Annie Long of Edgartown; her daughter and son-in-law, Donna and Chuck Cummens of Vineyard Haven; grandchildren and spouses: Kerry and Bobby Branca, and Brendan and Kesia Long, all of Edgartown, Taryn and Dan Ramsey of Silver Spring, Md., and Jessica and Gary Kovack of Vineyard Haven, five great-grandchildren, and numerous nieces and nephews.