Maureen Jean (Fisher) Anderson of Oak Bluffs died peacefully at Martha’s Vineyard Hospital on August 10, 2019, surrounded by family, after a long and valiant battle with cancer. She was 80 years old. 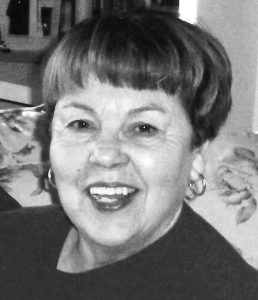 On Feb. 5, 1939, Maureen was born in Oak Bluffs to the late Meredith Sheldon Fisher and Ruth (Madeiras) Fisher. She lived her entire life in Oak Bluffs, the town she loved.

Maureen graduated from Oak Bluffs High School in 1956. While in high school, she was Queen of the Prom, and a cheerleader for the boys’ basketball team. It was at one of those basketball games that she caught the eye of a handsome young man serving in the U.S. Air Force who was stationed at the Peaked Hill radar station in Chilmark. William G. Anderson (Bill) was that man, and by the fall of 1956 they were engaged. Maureen and Bill married on Dec. 29, 1956, and were married for 62 years.

During those years, they worked hard, sacrificed, and raised four children on Oak Bluffs Harbor. Maureen created a happy, loving home for her children to grow up in. She took great pride in her home, and enjoyed decorating it to compliment the changing seasons and holidays. Every spring, she planted beautiful flowers in the window boxes and around the yard.

One of Maureen’s greatest joys was to have all of her children and grandchildren together to share a meal and spend time together. She loved bringing the family together for one of her spectacular Thanksgiving feasts, or for a special occasion when she might delight a family member or friend with a baked alaska, one of her many specialties. She loved hosting dinner parties, socializing with other couples, going out to dinner, traveling with Bill, walking all around Oak Bluffs, and going out to lunch with her girlfriends and then cruising the down-Island towns with them. Maureen was fun and funny. She was a wonderful wife, mother, grandmother, great-grandmother, sister, aunt, and friend. She was the matriarch of her family; its heart and soul. Maureen had a wonderful life.

Arrangements are under the care of Chapman, Cole, and Gleason Funeral Home. Please visit ccgfuneralhome.com for online guestbook and information. A memorial Mass will be held on Saturday, Sept. 7, 2019, at 11 am at Our Lady Star of the Sea Church, Massasoit Avenue, Oak Bluffs. Interment will be in the Oak Grove Cemetery in Oak Bluffs, where Maureen’s parents and all four of her grandparents are buried. A reception at the Portuguese-American Club will follow.