Rene Louis Blanc of Hidden Cove, Oak Bluffs, died peacefully on April 30th, 2019, just shy of his 91st birthday, surrounded by all of his six children and close relatives. He was first and foremost a family man, a devoted husband and father who exemplified integrity, hard work, generosity, and humor. A true gentleman, loyal friend, and respected businessman, he’ll be remembered with fondness and admiration by all who were privileged to know him. 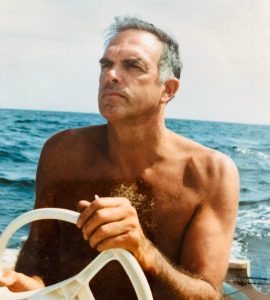 Born in New York City on May 16, 1928, and raised in Scarsdale, N.Y., Rene was the youngest of three sons born to Marcel Louis Blanc and Paule Voisin Blanc, who had emigrated from France as young adults and earned U.S. citizenship. Returning with his family for summer visits to their native Brittany and on Ile-aux-Moines, the cherished island home of his maternal grandmother, Rene developed his passion for a life lived near the sea; swimming, sailing, and savoring the bounty of local food and fresh catches.

After graduating from Dartmouth College in 1950, Rene served in the U.S. Army during the Korean War. When he returned, he took a job with AT&T in New York City, where he met his future wife, Patricia Burke, on a blind date. They married in 1954, a love story and partnership that would last 62 years. Although Rene and Patti moved around a fair amount when the kids were little, they built a beautiful house in Norwell in 1972, which included an apartment for Rene’s parents, who instilled a distinctively French vernacular in the large and sometimes unruly household. During this period, Rene and Patti began visiting Martha’s Vineyard with her brother’s family, and immediately fell in love with the Island. Soon, both families rented houses on Ocean Park for the entire season. These summers defined and cemented a legacy of amazing Vineyard memories, and Rene and Patti yearned to make the Island their year-round home.

In 1986, they built their home in Hidden Cove, Oak Bluffs, where they would live for the next 33 years. Rene spent most of his career as a regional representative for a large power and utility manufacturer, and retired in 1996. Always active and handy, Rene quickly attracted interest from many of his neighbors who needed a trusted friend to look after their properties in the off-season. Thus, Rene’s Property Care was launched, and he maintained over 30 devoted clients until “re-retiring” the month before he died. In addition, Rene was an active member of the Rod and Gun Club, Friends of Sengekontacket, and served as president of the Hidden Cove Association. He also dutifully and gently cared for Patti at home as her health failed, losing his beloved wife in December 2016.

Rene and Patti fulfilled their biggest dream together of raising a large family. Their first child was born in 1955, and they celebrated the birth of their sixth and youngest 10 years later. Suffice it to say, there were a number of broken windows and bones, stitches, kittens, stray dogs, celebrations, boyfriends, girlfriends, losses, and achievements during these halcyon days. But no matter how difficult things were at work or financially, Rene always found time to play with his kids, take a bike ride, play a game of Ping-Pong, tennis or shoot a few hoops. And as if that wasn’t enough, he found a way to coach three Little League teams and travel to see his daughter’s college basketball games. Rene’s natural athleticism and fun-loving spirit always had him at the bottom of a pigpile or spending an entire snowy afternoon careening down a sledding hill on his classic wooden 8-foot toboggan, and pulling all six kids back up for another run. His strong shoulders were a launching point for countless little feet, balancing his kids, nieces, nephews, and any other stray child who wanted to throw themselves into the ocean, the place he most loved to be with his family.

Rene’s dedication to his immediate and extended family was his core. This man devoted his entire life to nurturing and teaching his kids a strong work ethic, a sense of pride and purpose to themselves and their family, and also to the community and the world. He loved to frolic and have fun, but insisted on table manners, cleanliness, and best efforts. He took care of the material things he had, especially when it was not a lot. He abhorred waste, and may have been the original “up-cycler.” Rene loved boats of all kinds. He adored his little catboat, and always kept a boat or two in the garage, waiting to be restored. One of his proudest moments was getting up on water skis for the first time well into his 60s!

Rene remained energetic and positive to the end, tending to his caretaking business, making long trips to visit family and friends, and ultimately leaving this earth “with his boots on,” just as everyone had always known him. He leaves his six children, Deborah Duhon, Linda Young, Richard Blanc, Lisa Stewart, Christopher Blanc, and Timothy Blanc, and their spouses. He also leaves his brother-in-law Richard Burke, sister-in-law Jean Blanc, and his beloved 14 grandchildren, four great-grandchildren, and many loved nieces, nephews, and their families.

Although there is a sudden, and very large, painful void in the lives of all those who knew and loved Rene, he will forever be here in our hearts, giving us smiles, strength, and a wonderful perspective on life. He’s an angel, forever watching over and guiding us, that we may best carry forward his amazing legacy of steadfast love, unwavering moral character, and enduring “joie de vivre”! May you now forever be sailing with Patti, under blue skies, with a brisk breeze, in your now fully restored little wooden boat!

The family has planned a small private gathering in August to celebrate his life.