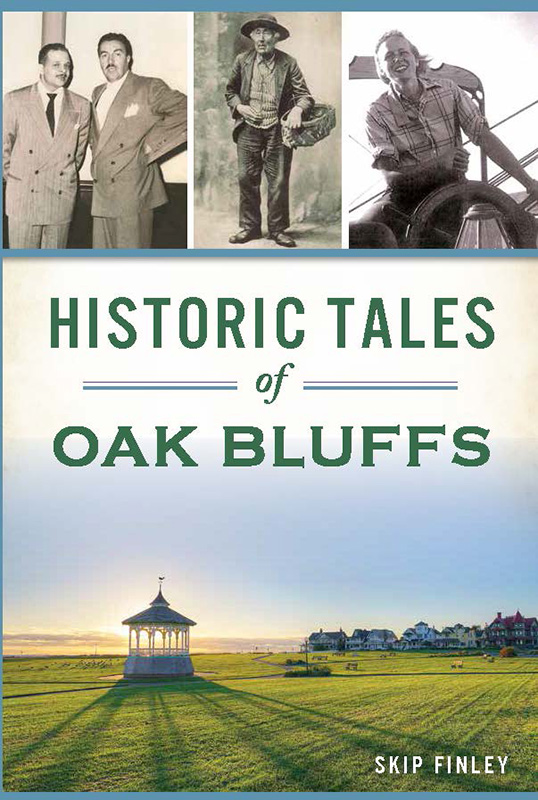 “In June 1955, the automobile trip from Long Island, New York, to Oak Bluffs Martha’s Vineyard, was a journey … Today’s four hour, 250-mile drive was then an arduous nine to ten hours in Dad’s Pontiac station wagon … and it was tortuous for the parents of three kids under the age of reason.” Thus, opens chapter one of Skip Finley’s “Historic Tales of Oak Bluffs” — a valentine to his much-beloved town.

From 2012 to 2017, Finley wrote the Oak Bluffs weekly town column for the Vineyard Gazette in which he included history because “I love our town and thought it might be interesting. It took a lot of research to essentially tell the story of how OB came to be OB — and over the years of doing it, it occurred to me that our history wasn’t all in one place — and hadn’t been told chronologically.” As a result, Finley curates a collection of bite-sized pieces of history to tell the story of how Oak Bluffs became a welcoming seaside resort for a uniquely diverse group of residents and visitors.

And it is amazing how much history he is able to cover in his handsome slim volume. It’s infinitely versatile, you can read it in a single sitting or savor it a bit at a time. Each chapter highlights a mixture of prominent people and events.

The original people of what is now Oak Bluffs, of course, were the Wampanoag who have inhabited the Island for some 10,000 years. Its modern history is marked with the start of the Methodist church summer campground meetings in 1835. Believers came for the sun, salt air, and sermons. The area was nicknamed “Canvas City” with, by 1858, some 12,000 souls staying in 320 tents that eventually became the fanciful Gingerbread cottages we see today. Finley explains their origin: “Families erected tents to house themselves during their often summer-long stay and devised intricate ropes tied atop them to differentiate one from another. Over time and to reflect permanence, the tenting became wood and resulted in the Victorian ‘gingerbread’ homes.”

By the late 1800s, the town had become a popular summer watering hole, and Finley recounts its resort era with wonderful anecdotes and people who made it such a fashionable vacation place. There is a wealth of information about this period but some of the tidbits I loved related to the great hotels. The opulent Sea View House and land with an adjoining wharf had an octagonal restaurant and 280 bathing houses. Make no mistake, it was bathing — a new social past time in the 1890s — not swimming, and consisted of standing in chest-deep water, fully clothed head to toe. For women, this included tights and long dresses with only their hands and faces exposed.

In yet another anecdote, Finley writes, “In a town filled with irony, colorful characters and stories, the Wesley House hotel stands alone … The hotel’s story was told by its owner:

I, Augustus, G. Wesley, of Cottage City … hereby make the following voluntary statement: Nov. 13, 1894, Tuesday evening, I went from a prayer meeting at the Methodist church in Cottage City to the Wesley hotel owned by me… I saturated some burlap in the closet under the stairs on the second floor with kerosene and wrapped it around a cigar box, in which I placed a lighted candle. I did this for the purpose of setting fire to the building and contents in order to collect the insurance on them.

Today, the renovated Summercamp Hotel is this same hotel, and the sole remaining majestic hotel continuously operating since it was built.

Finley tells me, “Oak Bluffs has SO many unique characteristics, especially for such a geographically diminutive place,” and recounts many fascinating ones in his book. It was the first town on the Island to get electricity and street lights. The Arcade on Circuit Avenue, constructed in 1867, was the first commercial building and once housed the town’s first library.

Oak Bluffs, with its some 3,820 homes are almost 60 percent of the Vineyard’s summer residences, and as many as 500 historic homes have no heat or insulation. And for anyone who’s wandered the area, you might not be surprised that it has the most parks per capita worldwide.

How about that it was the first Island town with charter airplane flights in 1919, with a seaplane arriving at the steamship wharf and another at the Inkwell — having taken two and a half hours to fly from Manhattan. Or that during Prohibition there were rumrunners transporting cargo to “Circuit Avenue hotels and bars, where Prohibition was more of a suggestion than an act of Congress.”

While many might know that the Flying Horses was brought to Oak Bluffs from Coney Island in 1884, Finley lets us in on the origins of catching the rings as you ride by: “The word carousel is from Spanish and Italian and means ‘little war.’ [It] was used to train cavalry men and horses — they would ride past the revolving carousel and practice spearing one of the rings hanging from the wheel.”

Throughout, Finley calls attention to Oak Bluffs’ diverse population, filling the book with vivid personalities from all walks of life. He writes, “We’re Wampanoag, European immigrants, born free and descended from slaves of color, Portuguese, Azorean, Cape Verdean, and Brazilian year-round and who knows how many other nationalities and colors during the tourist season.”

No matter where you hail from, it’s well worth diving into Finley’s historic tales to absorb more about this fascinating town, from its beginning to the present day.

“Historic Tales of Oak Bluffs” by Skip Finley. The History Press, Charleston, South Carolina, 175 pages. Available at Bunch of Grapes for $21.99, online, and at the author book talks, including 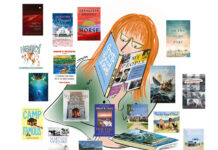