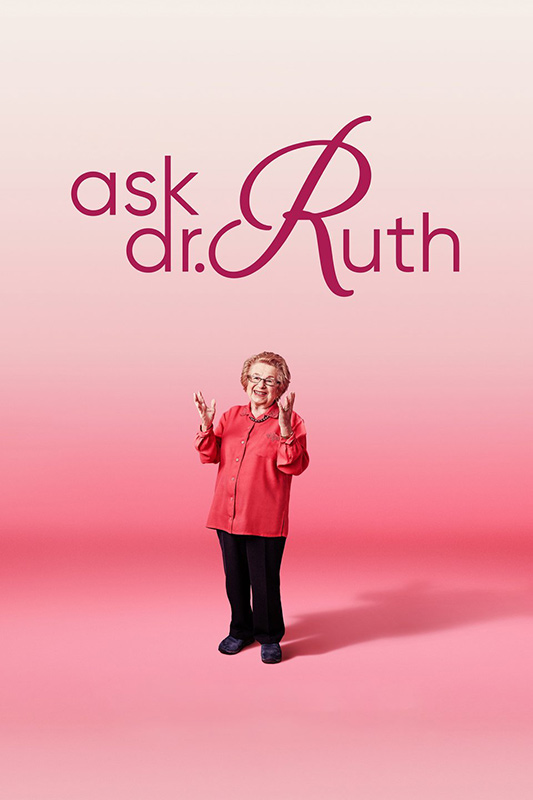 Brace yourself. Dr. Ruth is coming. Ruth Westheimer, M.D., a societal force of nature over her first 91 years, will be at the Performing Arts Center in Oak Bluffs on Saturday, August 31, at 8 pm.

She will comment and take your questions after the screening of “Ask Dr. Ruth,” a powerful, worthwhile film documentary of her life to date. The film lays out a breathtaking life lesson on how to survive, then thrive, from the world’s most famous sex therapist.

She will comment and take your questions after the screening of Ask Dr. Ruth, a powerful, worthwhile film documentary of her life to date. The film, presented by the Martha’s Vineyard Film Festival on Saturday, August 31, at 8 pm at the Performing Arts Center, lays out a breathtaking life lesson on how to survive, then thrive, from the world’s most famous sex therapist.

Ruth K. Westheimer (née Karola R. Siegel) is, in chronological order, a survivor of the Nazi genocide, an orphan, a sniper and wounded war veteran, an immigrant, a mom and wife, a community worker, a student, a media star, and an educator.

This film primarily is the life story of Ruth Westhimer, rather than only her career. We experience her, live and onscreen, as a woman who lives life urgently, intensely, like someone who knows she’s had a second, even a third chance at life.

In “Ask Dr. Ruth,” we see a woman who has lost family in the most unthinkable way, and now celebrates her family life. The significance of nuclear family loss and later recreation of her own family makes the scene of her 90th birthday party in May 2018 aching and emotional, not your average birthday party home video.

In these dystopian days, we search for heroes of high character We have found at least two recently: Supreme Court Justice Ruth Bader Ginsberg and social changemaker Dr. Ruth. Both happen to be very petite women of prodigious age and accomplishment. Joseph Campbell told us that heroes have a thousand faces, but who knew?

Last year we got “RBG,” a documentary about Bader Ginsburg that became a surprise runaway box office hit, replete with followup fan fare, including a nickname (Notorious RBG), T shirts, and fuel for the #MeToo movement.

Last fall a stage version of her life, “Becoming Dr. Ruth,” debuted at the Westside Theater in Manhattan, then played venues from Sacramento to Boston to positive reviews for Anne O’Sullivan as the one-woman cast.

“Ask Dr. Ruth” generates the same intensity of appeal as the “RBG” phenomenon, due in part to the directorial talent of top-rated documentarian Ryan White, who’s done awardwinning work for Netflix, HBO, PBS, and here, for Hulu, from bigtime documentary maker Magnolia Pictures.

White knew what he had here, and was careful not to step on the story of a 10-year-old sent by her parents to an orphanage in Switzerland just before the Nazi curtain fell. He chronicles a diaspora that included fighting as a 20-year-old in the 1947–49 Israeli-Palestinian War, eventual emigration to Washington Heights in New York, and finally, miraculously, led to a middle-aged Dr. Ruth, a TV star with a unique message visiting millions of Americans in their homes in the 1980s and 1990s.

There are no family photos or family recollections of her childhood after age 10. White uses a gently animated, silent face of Ruth to accompany voiceover and background visuals. Only the eyes, face, and fingers move to tell us her feelings as the 10-year-old becomes a teen, then a young woman, reacting to voiceover lines from her diary and letters from her parents who knew, as she did not, that they would not see each other again. If those scenes don’t move you, check your pulse.

Westheimer became America’s sexual advice giver because she spoke boldly about sex, a topic no one talked about publicly. She blew past the censors who relegated her 1980, 15-minute radio show to midnight on Sunday night on WYNY FM, and then was nationally syndicated on TV by the Lifetime Channel within a few years.

We spoke last week by phone with Dr. Ruth in her Washington Heights apartment of more than 50 years, following her day trip to Chicago to speak with a crowd of 700 about her recently released life story.

“I love being compared with [Ruth Bader Ginsburg]. You know, she says that only in America could her life have happened as it has. I say, only in New York could this have happened to me. This city is so warm and welcoming to immigrants,” she said.

Westheimer will not talk politics. She will talk in her rich, German-inflected staccato about her work and how she got into it.

“My community work [with Planned Parenthood in the 1950s] in East Harlem made me realize I didn’t know enough. I needed more education,” she said. Her title, “Dr. Ruth,” was born of that experience, long after she worked with sex therapist and clinician Helen Singer Kaplan and received a doctorate from Columbia University in 1970. She also holds a degree in psychology from the University of Paris, and a master’s in sociology from the New School in New York.

Westheimer shared an insight into the psychological survival of kids like her. “I didn’t have time to include this in the film, but I did a clinical study with lots of followup with the children who were in the orphanage with me as adults. I found no examples of extreme depression or psychological issues among them over the years. None. We had developed our own love- and support-based community,” she said of her seven years in a Swiss orphanage, which required her to change her “too German-sounding” name of Karola. She chose Ruth, her middle name. “I knew that my family would recognize me by that name” when they looked for her, she explains in the film.

Asked which of her roles and careers fits best, she said, “I see myself as an educator. I realized in my East Harlem work that I didn’t know enough [to teach well enough],” she said of her determination to be an accomplished educator.

On the state of sexuality and sexual behavior in the U.S. today, Westheimer says, “We know more today than we did, but there is still a lot to do, particularly in teaching sexual safety, not taking chances. That’s why I have done a fourth edition of ‘Sex for Dummies.’”

I’ll tell you something else I learned about who Ruth Westheimer is. Following a rushed interview after she deplaned from Chicago on Friday, Westheimer called back on Saturday to say she’d gotten some rest and could answer more questions.

In the Gaelic, we’d call it being a mensch.