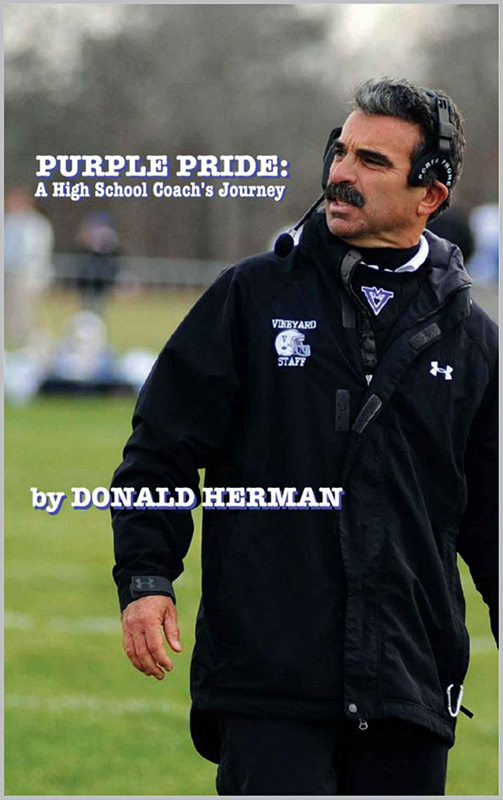 Herman retired after the 2015 season, but was collared to return to the coaching helm in 2018 after two off-course Vineyarder seasons. “Purple Pride,” however, focuses on his first journey teaching and coaching on Martha’s Vineyard between 1988 and 2015, when this football coach from Savannah, Ga., took his Islander wife Pam and their kids back home.

Football is an important part of the culture in many places in our country. Football is a religious experience in others, including Ohio, Michigan, Texas, and anywhere in the South. And if you were a small guy playing high school ball against people who were going to go to D1 schools and the NFL, you had to kick the intensity up another notch.

A friend of mine, a smallish running back who played for Paul “Bear” Bryant at Texas A&M, told me that one day Bryant grabbed his facemask and reminded him loudly that “you itty-bitty guys have to try harder and run faster than the big guys.” My pal was just under six feet, maybe 180 pounds. Herman played that way at 5 feet, four inches, and 150 pounds, then he brought the extra intensity north with him in 1988 to a moribund high school football program on Martha’s Vineyard.

MVRHS football teams won 71 percent of their games (220-90) with five state championships under his guidance. Herman is in the Massachusetts High School Football Coaches Hall of Fame.

The stories of game situations and player behavior, good and bad, tumble out unvarnished, just the way they happened. They make you laugh, sometimes bring sadness, but mostly awe and pride about “the little football Island that could,” as game announcer Ken Goldberg wrote in the book’s liner notes. When the Island reads this book, there will be laughter and teasing in every Island coffeehouse. “Purple Pride” is full of people you know: players, fans, and parents (nonspoiler alert — don”t miss the Linda Estabrook story about her 2-year-old yelling “Hut! Hut! Hut!”).

But here’s the thing, we learn in this book about how the team gained success, the direction they received. Herman did not make it easier, or ever look the other way, or accept less than best effort. He expects his players to excel first as human beings.

The book reveals a philosophy of success leading to success with the Xs and Os, Herman’s philosophy is based on the intangibles — accountability to team, community, and self, hard work, focus, and intensity. Some players came with them, others learned them from Harman. Now you could screw up, as some did in often hilarious fashion, but you could earn back your captaincy or your playing time if you agreed to do the work and the punishment presented to you.

Obviously, the topic makes this a football book, but there have been a bunch of those featuring the Vineyarders, as well as gobs of magazine, radio, and national TV coverage of the unique MVRHS program.

We live increasingly self-centered, isolated, and too often not-happy lives. This is a story of how “we” not “me’” really does work better. It unwinds as a look at the entire fabric of the Island community, and it weaves the fabric to be tighter, more lasting.

“Purple Pride: A High School Coach’s Journey” by Donald Herman. Available now at amazon.com in paperback at $15.95 or ebook (at reduced price), and soon at retailers on the Island.