Unsurprisingly, since we live on an island, Vineyarders look to the sea for inspiration, recreation, and food. This is an island of fisher folk, and the striped bass, a large and delectable species, may be the most popular target when Vineyarders wet a line. Though mainly absent from our waters during the winter months, stripers migrate north through our latitude in spring, can be found (largely in deeper waters) through the summer, and then move south again in fall, when the fish feed eagerly to store energy for the winter.
Stripers will take both artificial lures and natural bait (please use circle hooks if you fish with the latter, to facilitate the release of fish you aren’t keeping), and can be caught from boats or from the shore. Fish below the 28-inch legal minimum size cannot be kept, and a one-fish possession limit helps conserve the population of this valued species.
At times, striped bass are fairly easy to catch; at other times, they seem oblivious to whatever you offer them. But bass are powerful for their size, and they grow large: If you connect with one, a legal-size striper will give you a thrilling workout before you land it. Sussing out where stripers will be and what they might strike at is both an art and a science, and the Vineyarders who are best at catching these fish earn and deserve a special standing in the year-round community.
Breeding primarily in mid-Atlantic estuaries (notably Chesapeake Bay), stripers are vulnerable to poor water quality, and their popularity as a recreational and commercial target puts great pressure on the population. Accordingly, the striped bass population is intensively managed, and honoring size and bag limits is part of being a responsible harvester. But if you can catch a keeper (or buy a fillet during the sometimes-brief commercial season), you’re in luck: Grilled, broiled, or roasted, the firm, mild flesh of a striper is one of the best things the ocean has to offer. Bon appétit! 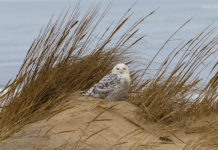 Ask an Expert: Where can you find a snowy owl on Martha’s Vineyard? 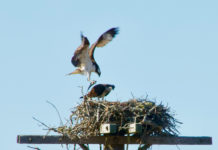 Ask an Expert: What bird makes those big nests on top of poles around the Island? 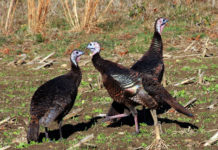 Ask an Expert: Are those actual wild turkeys walking around?