Alfred Eric Street died peacefully in his sleep on August 15, 2019, at Casa São Bartolomeu, in Estoril, Portugal, after an eight-year battle with the neurodegenerative disease Lewy body dementia. He was 78 years old. 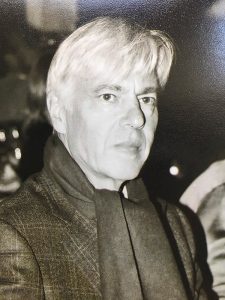 Alfred was a professional classical guitarist. Born in Antibes, France, on August 31, 1940, he was the son of French pianist Olga de Catalano and playwright and actor Jean Street, also known in the theater as Jean Marsan. Fred spent the first five years of his life living in the countryside with his grandparents, away from the threat of Nazi bombings on the port of his hometown. After the war he enjoyed sailing and spearfishing in the Mediterranean. He attended several Jesuit boarding schools. At 15 he discovered his calling when given his first classical guitar. His earliest musical influences were Django Reinhardt, the Beatles, and Andres Segovia. In the early 1960s he accompanied well-known French folk singer Hugues Aufray as part of his Skiffle Group, but soon grew weary of the rock ’n’ roll lifestyle. It was then that he began his own study of classical guitar with Alexander Lagoya and Ida Presti.

In 1965 he married Margot Barnes, who introduced him to Martha’s Vineyard, which, with his affinity for the sea, was to become his second home. Together they had three sons. He toured extensively in the U.S. in the 1970s, giving solo concerts to eager audiences. He was also a teacher at both the Longy School of Music in Cambridge, where he resided during the winter, and the New England Conservatory. After the loss of his father, he moved back to France, and taught at the Orly Conservatory outside Paris. He met his second wife, Marie-Cécile Antonelli, in 1986 in France and had two children. In the late 1980s he formed the Trio Gershwin with a pianist and cellist, and again toured the U.S. and Europe, playing original arrangements and transcriptions of Gershwin music to packed houses.

He was a gifted musician capable of interpreting different genres with equal sensitivity and skill. On any given day in summer, you could hear his guitar calling out, warm and inviting, from his studio on William Street in Vineyard Haven. His classical repertoire included works by Sor, Albéniz, Bach, and Villa-Lobos. In jJazz, he played the classic repertoire. He recorded several studio albums during his career.

He was a playful and loving family man, and all who knew him were touched by his natural elegance and sense of humor.

Fred enjoyed building projects, and designed and helped build two homes for his family on the Vineyard. He had a strong enthusiasm for science, and especially looked up to the astrophysicist Hubert Reeves. He was an avid sailor, bicycler, snorkeler, and player of Ping-Pong and chess. He loved the game of tennis, and saw to it that all his children had the opportunity to play. He was also an amateur cinematographer, and enjoyed projecting his Super 8 films on family movie nights.

A memorial service will be held on Sept. 28 in his native Antibes, France, and on the Vineyard next summer.