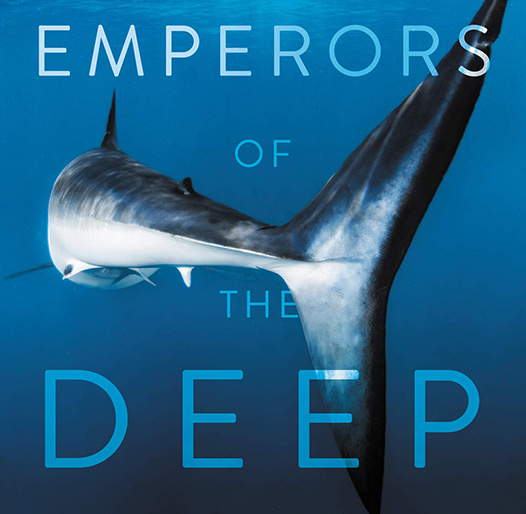 Let’s get one thing straight. According to William McKeever in his book “Emperors of the Deep,” sharks are not maneaters — they don’t prey on us humans. According to the International Shark Attack File, the world’s definitive database on shark attacks, they’re much, much more interested in fish and seals, which they could mistake us for when we’re swimming. As a matter of fact, he tells us that in the U.S., you have a 1 in 265 million chance of being killed by a shark compared with a bolt of lightning (1 in 218,000), let alone an automobile crash or dying from an opioid overdose, which is a frightening 1 in 92 odds. There have been a grand total of 828 fatalities since 1580. And while sharks kill an average of four people a year, humans slaughter millions of sharks per annum.

This and all the other fascinating information in McKeever’s book comes, he tells us through his research, firsthand experience, and extensive interviews with ecologists, conservationists, and world-renowned shark experts. He writes that his book “is a culmination of my two-year journey, at once a deep dive into the misunderstood world of sharks and an urgent call to protect them, a celebration of sharks as remarkable apex predators, supersensory navigators, and man’s greatest ally in nature.”

In 2018, McKeever founded Safeguard the Seas, an ocean conservancy that uses activism, advocacy, and education to protect sharks and other fish threatened by man. He writes, “Contra “Jaws,” I have figured out the only way to change the way we think about sharks is to cast the species in an entirely new light, in all their underwater glory, and share with a general audience the emerging science of sharks, which is slowly pulling back the curtain on one of the ocean’s fiercest predators.”

McKeever has been obsessed with sharks from childhood, and he spent his summers on Martha’s Vineyard for 10 years. “This Island is where I grew up and fell in love with the ocean,” he says. He fills his books with amazing facts that make us sit up and pay attention. The press release itself lists such impressive facts such as that sharks are over 400 million years old, which to put that in perspective is 50 million years older than trees. And among some 500 species of sharks, there are those in Greenland that measure 13 to 16 feet in length and weigh 3,000 pounds and may themselves live more than 400 years, making them the longest-living vertebrate in the world by at least 100 years. There are bioluminescent catsharks. Pregnant mako sharks carry their pups for 15 to 18 months.

Among the experts McKeever introduces us to, I am partial to the story about when he was watching a scientist pull up alongside a tiger shark, he flipped her over, and put her into a “tonic immobility,” a kind of trance sharks fall into when the electric pores on their snouts are rubbed and their stomachs are exposed. Pretty cool stuff, right?

Parrotfish are crucial to keeping algae off coral reefs, and when groupers monopolize and eat parrotfish, the algae will grow out of control and kill the reef. The sharks make sure that the grouper population is held in check so this does not happen. Furthermore, McKeever tells the reader, “Studies have shown that coral reef ecosystems with high numbers of apex predators tend to have greater biodiversity and higher densities of individual species … A healthy coral system requires a healthy number of sharks, which in turn balance the herbivores [fish that eat seagrass and similar items] and the fish that prey on them.”

And seagrass is important not just to the oceans, but to humans as well, because it is the primary producer of the organic carbon that all animals in the ocean food web need to survive. More than half of the oxygen you breathe comes from marine photosynthesizers, like phytoplankton and seaweed. McKeever tells us it is also a valuable weapon against climate change. He says that seagrass pulls carbon out of the atmosphere: “Each year, the world’s seagrass meadows can capture up to 83 million metric tons of carbon, and a single acre of seagrass can sequester 740 pounds of carbon a year, the same amount emitted by a car travelling about 3,860 miles.”

A staggering 100 million sharks are killed a year. Commercial fishing is decimating shark populations by the millions of tons when they get caught when tuna is being baited. They could be released, but instead some 70 million die after they are finned alive. Their fins, which weigh less than 5 percent of their body weight, go from $30 to as much as $300 a pound to fill the demand for Chinese shark fin soup. The remaining 30 million are killed for meat or use in cosmetics and supplements.

He argues persuasively, “Today, sharks are under the greatest threat in their entire 400-million-year history, having survived five extinction-level events, including the one that killed the dinosaurs. Despite the fact that they play an essential role in maintaining the delicate balance of the marine ecosystem, and are key indicators of the overall health of our oceans, sharks are not a priority for conservation … Without sharks, the marine pyramid will crumble and wreak unforeseen consequences … If we disrespect them, we disrespect our oceans. And if we disrespect the oceans, we risk destroying the planet’s primary source of life.”

McKeever ends with a poignant question, asking what our children will see in 50 years gazing out to sea: “Will they witness a lifeless sea filled with broken reefs … and dull, gray seafloors? … Will our children know the great apex predators only through dusty books on library shelves? Or will our children stand on a beach and see, unfolding before the eyes, the miracle of life?” He wants them to “look out on the ocean and know that underneath the surface, a shark will be swimming, standing guard over its dominion, protecting the ocean, the great miracle on earth.”

“Emperors of the Deep: Sharks —The Ocean’s Most Mysterious, Most Misunderstood, and Most Important Guardians,” by William McKeever. Harper One: New York, NY. Available online and at Bunch of Grapes in Vineyard Haven for $25.99.