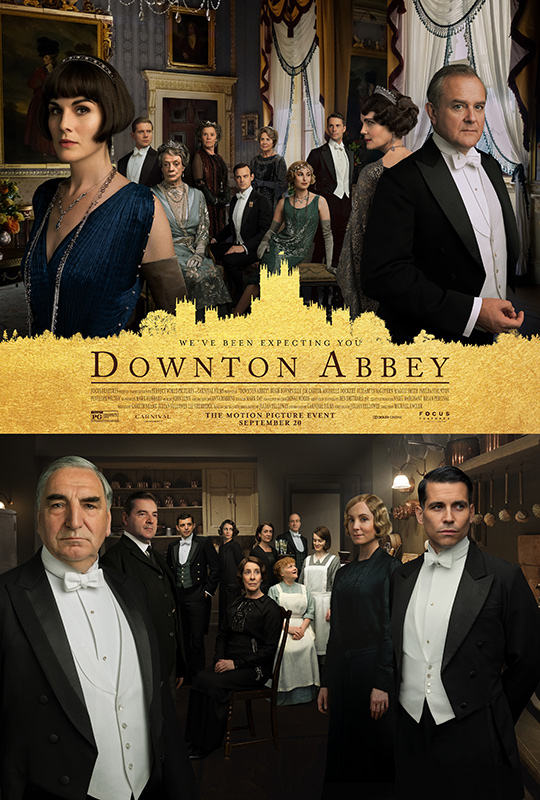 “Downton Abbey” is back, this time as a movie that opens Friday, Sept. 20, at the M.V. Film Center after a sold-out preview last week. The usual cast of characters from the PBS series that ran from 2010 to 2015 is on deck, plus a few new members. Julian Fellowes is in charge again as writer for the film, which is directed by Michael Engler (“Sex and the City,” “Six Feet Under”).

While some critics remain lukewarm about the film version, as they were for the TV series, fans should be more than satisfied. Sentimental and romantic, yes, but a welcome diversion at a time when U.S. politics and world affairs seem grim.

The year is 1927, and, starting with news of a royal visit from King George V (Simon Jones) and Queen Mary (Geraldine James), the plot takes on many pleasant twists and turns. To keep things from turning too sugary, an ominous stranger, Major Chetwode (Steven Campbell Moore), arrives, booking a room at a local hotel. More will be heard about him and his dealings with Grantham son-in-law Tom Branson (Allen Leech).

In addition, Lady Maud Bagshaw (Imelda Staunton), the queen’s lady in waiting, will arrive with the royal cortege. She is Robert Crawley’s (Hugh Bonneville) cousin, and has been estranged from the Grantham family. Dowager Countess Violet (Maggie Smith) is fit to be tied, because Maud has decided not to name her son Robert as heir. Instead she has shocked Violet by naming her maid, Lucy Smith (Tuppence Middleton), as heir, and Violet goes on the warpath.

More complications ensue when the royal servants arrive. The royal butler, Page of the Backstairs (David Haig), summarily dismisses the Grantham staff for the royal visit, and the royal chef M. Courbet (Phillippe Spall) takes over the kitchen. See if you can figure out who the thief is who keeps nicking household trinkets.

The Downton Abbey staff isn’t down for the count, and Lady Mary’s maid Anna Bates (Joanne Froggatt) hatches a plot to foil the visiting royal staff. Lady Edith (Laura Carmichael) ends up suffering one crisis after another. The king wants her husband Bertie (Henry Hadden-Paton) to disappear on a three-month tour of Africa, with unexpected problems for Edith, who also develops an enormous issue with her gown for the next day’s ball.

Just as the grand parade for the king and queen is set to begin, Branson saves the day with help from Lady Mary. He is also instrumental in aiding a tearful Princess Mary (Kate Phillips). That night Barrow visits an underground gay nightclub, and finds himself in a lot trouble as a result.

Most, if not all, that goes wrong for the family is happily resolved. “Downton Abbey’s” extensive cast deserves kudos for their fine acting, and who knows if we may not find a sequel in the offing?

Information and tickets for “Downton Abbey” and other Film Center, Capawock, and Strand films are available at mvfilmsociety.com. Information for films playing at Edgartown’s Entertainment Cinemas is available at yourneighborhoodtheatre.com/location/2461/Edgartown-Cinema-2.