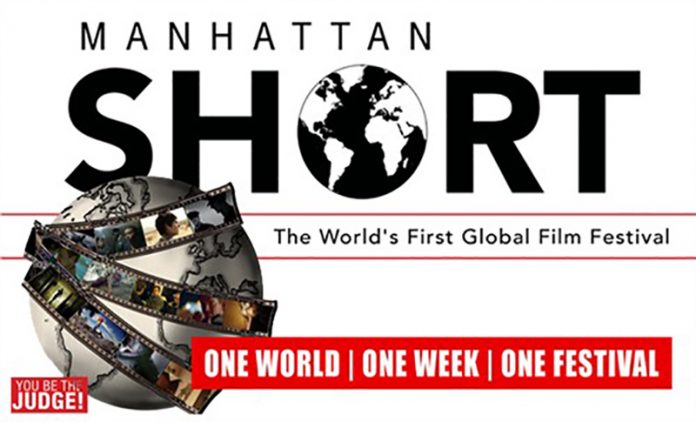 Ten of the best film shorts from around the world will be screened on the Vineyard at the Martha’s Vineyard Film Center daily, from Thursday, Sept. 26, through Sunday, Sept. 29. It’s the 22nd Manhattan Short Festival, which invites viewers to vote for their favorite film and their favorite actor. The 10 films will qualify for Oscar nominations, and one, “Fauve,” was nominated in 2018.

The finalists were chosen out of 1,250 entries from 70 countries. Among this year’s shorts are three from the U.K., two from the U.S., and one each from Canada, France, Iran, Finland, and Germany. The program divides them into two sections of five each, with an intermission in between.

From France comes “Nefta Football Club,” a comedy set in Nefta, Tunisia. Two men near the border between Tunisia and Algeria search for a mysterious missing donkey. The donkey wears headphones, and has been trained to head home to the music of Adèle. Two boys on a motor bike discover the donkey and grab the white powder it’s carrying. The rest is a surprisingly comic commentary on illegal drugs.

“Debris” is a disturbing story from the U.S. about immigrants working at a construction site. All hell breaks loose after an injury that reveals the worst side of human labor trafficking.

In “Driving Lessons” from Iran, a woman must take driving lessons with her husband as well as an instructor. The reason? Local laws require a chaperone, in this case, with unexpected consequences.
A restaurant server is at the center of “Tipped” from Canada. The title is a pun on what happens when she waits on an obnoxious trio.

“Silvia,” the title of a haunting film from the U.K., is also the name of the car the mother drives with her mother and two daughters. The heartbroken mother is selling the car, which has become an important part of her family’s life.
The Finnish film, “The Match,” takes place between two women playing tennis. The players are not particularly friendly, until something happens at the end.
“Being Away Doesn’t Mean I Don’t Care” from the U.K. tells the story of a curmudgeonly old man who rejects family or any other kind of human interaction. That is the case until a robot arrives on the scene.
Dancing is the focus of the German entry, “Malou.” The aspiring young woman whose name is the title is repeatedly denied entry to the dance school she hopes to attend. Her determination leads to an unusual ending.
From the U.K., “A Family Affair” follows a young woman, Annabelle, who wakes up on her 3oth birthday in an unfamiliar bedroom. In walks elderly Bernard with breakfast, much to her consternation. Her grumpiness slowly dissolves, until she dances with Bernard and events take another turn.
And finally, the dystopian future of “At the End of the World,” from the U.S., focuses on a video of penguins. Two of the individuals who stop to watch the penguins long for an elusive romance, particularly because World War III is sending some of them to the battlefield.

The winner, chosen by voters worldwide, including the Vineyard, will be announced on Monday, Oct. 7, at manhattanshort.com. Stay tuned, tour reviewer will reveal her favorite film as and the one she thinks will win in the Oct. 3 issue of the MV Times.

Information and tickets for the Manhattan Short Festival and other films playing at the Film Center, the Capawock, and the Strand are available at mvfilmsociety.com.