Elinor Abbott Stewart passed away in the night of Sept. 1, 2019. She was 93. She is survived by her sons and daughter, and several grandchildren and great-grandchildren. 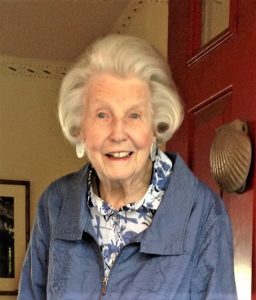 Elinor was born in Winchester, and grew up in Reading, the daughter of George Abbott and Cora Look of the Lambert’s Cove Look family. She summered almost every year of her life on the Island, often traveling alone by train from Reading the day after school ended as a youngster and young adult. The three years that she did not join her mother’s family on the Vineyard, she was in Japan with her own family, including her husband Bob Stewart.

Elinor graduated from the University of New Hampshire, where she met Bob. After Bob graduated from West Point, the two were married at the Lambert’s Cove Methodist Church in 1946. She enjoyed being a military wife and mother, bearing well with the constant moving of the household, for over 30 years. In 1983 Bob and Elinor built a house on her beloved hill on the family property overlooking Lambert’s Cove, and they split their year between there and their residence in Arlington, Va.

Over the years, Elinor was an active walker and tennis player, a reader (especially mysteries), and a collector of American antiques. She doted on three generations of children, and loved to visit the Flying Horses in Oak Bluffs to exhort them on to get the brass ring, which she often got as a young girl.

We will all miss her, and visiting the Vineyard will never be quite the same.

A service will be held at 1 pm on Saturday, Nov. 2, at Lambert’s Cove Cemetery, followed by a reception overlooking Lambert’s Cove at her house on the hill.

If desired, donations may be sent in Elinor’s name to Hospice of Martha’s Vineyard, PO Box 1748, Vineyard Haven, MA 02568.