Jane Carolyn (Whiting) Wiley, beloved wife, mother, grandmother, great-grandmother, and aunt, of Edgartown, passed away at home on Sept. 18, 2019. She was 96. 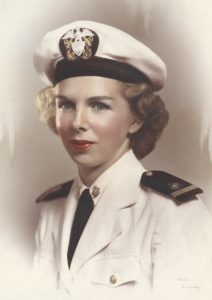 Jane was born to Franklin and Harriet Whiting on June 26, 1923, in Orange, N.J. She attended school there, and graduated from Orange High School. Jane remembered fondly childhood visits with her uncle, aunt, and cousins at their farm in Montgomery, Ala., and vacations on the beaches in New Jersey. She loved the outdoors and summer camp in New York.

After high school graduation, Jane enrolled in the Jersey City Medical Center School of Nursing at Jersey City, N.J., where she received the School of Nursing Distinguished Service Award, Hague Medal, and Margaret Hague Maternity Hospital Award. She was licensed as a New Jersey registered nurse on Feb. 3, 1945. On March 10, 1945, she was commissioned as ensign in the Nurses Corps, U.S. Naval Reserve, and served on active duty during WWII from June 26, 1945 to Sept. 20, 1946. On June 23, 1945, she was appointed U.S. Navy Reserve Nurse, and she was honorably discharged from the Navy on Feb. 28, 1951. Her active service was at Portsmouth Naval Hospital, Portsmouth, Va., and at the U.S. Naval Hospital, Norfolk, Va., as ward supervisor.

On June 25, 1949, Jane married Henry Wiley, and when Henry completed law school, they moved to Toms River, N.J. There they purchased and gradually renovated a mid-19th century farmstead in Silverton. They raised five children, Bruce, Barbara, David, Thomas, and Charles, in the countryside, and cultivated gardens of flowers and vegetables.

They vacationed on Martha’s Vineyard, where Henry’s grandfather had had a cottage since 1917, and eventually moved to Edgartown after Henry’s retirement in 1998. Jane raised dogs and horses, was a 4-H leader, played piano, enjoyed needlework, knitting, hooking rugs, classical music and opera, gardening, camping, skiing, swimming, clamming, and tennis. She was very creative, and excelled in all of her projects, winning prizes for her original hooked rugs about Vineyard history. She was a doll artist, and for several years she exhibited her original dolls, characters of Dickens’ “A Christmas Carol” at Toms River Historical Society and the Edgartown library. She generously shared her knowledge of cooking, handiworks, gardening, etc., with all who asked. Jane was an avid reader, and enjoyed genealogical research and was proud of her Mayflower heritage. She was a member of the M.V. Antiques Club, M.V. Doll Club, and M.V. Garden Club. She and Henry enjoyed traveling with Henry’s sister Polly and husband Charles Clark, and his sister Bobbie and Jim Morley. Henry passed away on June 26, 2013. They were married for 64 years.

In her final years Jane enjoyed activities at Edgartown Council of Aging Anchors Program. Jane will be buried with Henry at the Edgartown Cemetery.

Burial will be at a 1 pm graveside service at the New Westside, No. 433, Edgartown Cemetery on Oct. 26, followed by a memorial service at the home of Charles and Christine Wiley, 29 Indian Hollow Rd., West Tisbury, MA 02575.

The family of Jane Wiley wishes to thank Hospice of Martha’s Vineyard, and Jane’s private caregivers, for their dedication and support.