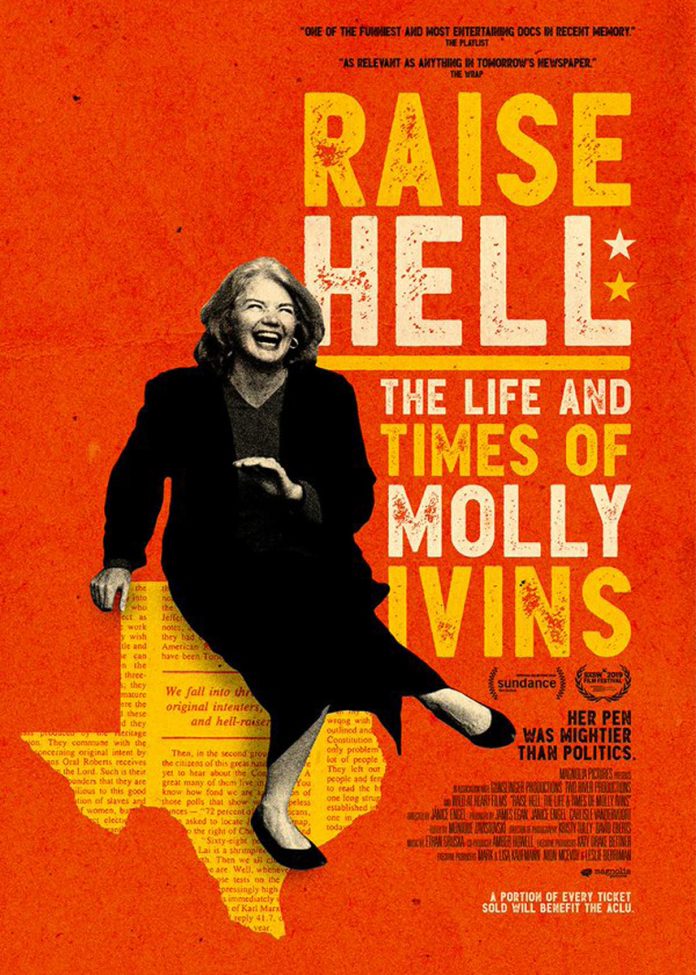 Opening at the M.V. Film Center on Friday, Oct. 4, is “Raise Hell: The Life and Times of Molly Ivins.” The Texas journalist loved to skewer politicians, and did it with humor. Directed by Janice Engel in straightforward fashion, this documentary captures Ivins at her salty best.

Named Mary Tyler Ivins at birth, she couldn’t have been less like Mary Tyler Moore. Ivins grew up in Houston with a conservative, authoritarian, oil-and-gas executive father, and by her teenage years she was regularly taking issue with his political beliefs. Besides having a big voice, she was physically imposing at six feet. Attending Smith College like her grandmother, mother, and sister, Ivins spent a year in Paris at the Instituts d’études politiques. She also received a master’s degree from Columbia School of Journalism. She had dreams of becoming a foreign correspondent, but at the time the door to that career was closed to women. Ivins’s mentor was John Henry Faulk, the Texan radio host who helped end the Hollywood blacklist, and Texas Governor Ann Richards became a good friend.

In addition to working at newspapers that included the Minneapolis Tribune, where she was the first woman police reporter, the Texas Observer, and the New York Times, she wrote a syndicated column that ran in 400 newspapers at its peak. It earned her dozens, if not hundreds, of diatribes, even death threats.

“Politics,” she said, “is the finest form of entertainment ever invented.” Texas is more American than America, claimed the three-time Pulitzer Prize nominee, and she also called it a national laboratory for bad government. At the same time Ivins lambasted Texas, it remained her much-loved home state.

Ivins’s career at the New York Times ran from 1976 to 1982. While there, Ivins wrote the obituary for Elvis Presley, and covered the funeral of the “plump corpse.” She claimed the Elvis coverage would be what she was best remembered for. One of her notorious quips while at the Times was the “gang pluck” she called a chicken-killing festival, which an outraged editor Abe Rosenthal claimed was sure to offend readers. After the Times, she moved to the Dallas Times-Herald for 10 years. Her 1991 book, “Molly Ivins Can’t Say That, Can She?” stayed on the N.Y. Times bestseller list for more than half a year.

There’s no such thing in journalism as objectivity, according to Ivins. When conservative Republican Warren Chisum of the Texas House of Representatives pressed for antisodomy legislation, Ivins quipped, “If his IQ slips any further, we’ll have to water him twice a day.” Democrats didn’t fare much better, with Ivins calling their leadership gutless. Bill Clinton’s support for the Welfare Reform Act of 1996 so appalled Ivins, she decided not to vote the year he ran for re-election.

Ivins became an expert on fellow Texan George W. Bush, and in one of her famous putdowns, she nicknamed him “Shrub.” It appears as the title of her 2000 book. Another best-selling book attacking Bush, “Bushwhacked,” followed in 2004.

No matter what their political persuasion, “Raise Hell: The Life and Times of Molly Ivins” will entertain viewers with the story of this larger-than-life journalist, who was outrageous and funny, but also insightful. Ivins died from breast cancer in 2007, at the age of 62.

Information and tickets for “Raise Hell: The Life and Times of Molly Ivins” and other Film Center, Capawock, and Strand films are available at mvfilmsociety.com. Information for films playing at Edgartown’s Entertainment Cinemas is available at yourneighborhoodtheatre.com/location/2461/Edgartown-Cinema-2.

Build your own Built on Stilts performance