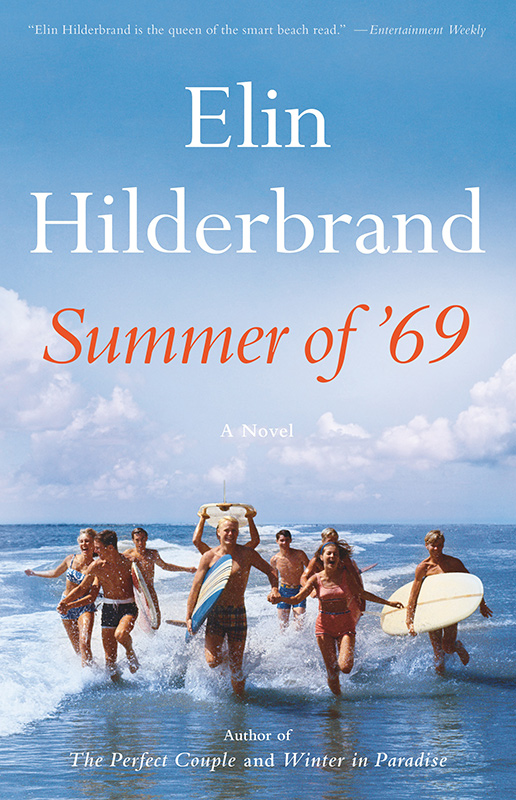 Of the hot and heady days of the late Sixties, perhaps none was so memorable as the “Summer of ’69,” the title of Elin Hilderbrand’s newest novel — this one set here and in Nantucket. And while summer is certainly over and we’re well into fall … a good “beach read,” especially one by Hilderbrand, is never out of season. Lucky for her readers from far and near, the Winnetu Oceanside Resort offers a “Summer of ‘69” extravaganza from Oct. 17 to 20, with book-related events and opportunities to spend time with the author.
Her story has, as she says, a very specific genesis. Her twin brother Eric and she were born July 17, just one day after the Apollo 11 mission launched, and the next weekend was the Chappaquiddick incident. Every time a significant birthday rolls around, the anniversaries of all the events are in the news as well. “So, it became a part of who I was,” Hilderbrand says.
She emphasizes, for those wary of historical fiction, that she didn’t set out to create a documentary but rather “a classic Elin Hilderbrand novel — there are scenes at the beach, and there is a lot of food and wine, and great Nantucket and Vineyard atmosphere, so that you feel that you’re there. It only happens to be set 50 years ago. There’s no reason to be afraid of it because it’s a historical novel.”
In “Summer of ’69,” Hilderbrand takes the national scene and makes it personal by deftly interweaving all the hot topics of the era through each of the main characters of the story’s family.
The matriarch, Exalta, is a formidable grandmother and much of the action is set in her house on Main Street, Nantucket, and with all the class implications thereof. Under her roof in All’s Fair (metaphorically perhaps, “in love and war”) are her daughter, Kate, who has soaked her worry about shipping her only son off to Vietnam in booze from morning to night. Based on her own first marriage, Kate counsels her oldest daughter, 24-year-old Blair, who’s nearly ready to give birth to twins, to accept her husband Angus’ supposed affair, but comes to shelter her once he throws her out. Blair is miserable not just from the physical discomfort of bursting with two babes inside her, but from having lost her personhood because Angus has demanded she abandon her dream of pursuing a graduate degree in English to stay home “barefoot and pregnant” and give up any hope of a career. Reflective of the day and age, pregnant Blair drinks and smokes without a second thought, but mostly drowns her sorrows in endless mounds of well-described food.
Kate’s middle daughter, 21-year-old Kirby, is devoted to civil rights and feminism. Coming out of a mysteriously difficult semester at college and, much to the family’s disgrace, double arrests at protests, she avoids living with the family in Nantucket and instead flees to the Vineyard. Kirby’s budding relationship with Darren, a Harvard student from a prominent African American family in one of the Campground cottages, brings out the racial tensions of the times. And for good measure, Hilderbrand has Kirby working the overnight shift of the front desk of the Shiretown Inn, which brings her into direct contact with the Senator Kennedy debacle.
Perhaps the most compelling character is Jessie, Kate’s youngest, an angst-ridden 13-year-old daughter who both watches and is embroiled in the turmoil unfolding not only in her own family but across the country. And there is lots to unfold, as secrets and untold truths abound.
She says the biggest challenge in writing “Summer of ‘69” was “trying to get it right. I wanted it to be meticulously detailed. I wanted to get the time very right. I wanted to capture the feel. I wanted to capture the depths of the emotions, like with the son overseas.” With details of the music from the Rolling Stones to Peter, Paul, and Mary, and Led Zeppelin to bell-bottom jeans and the VW Bug, Hilderbrand hits all the right notes.
Like her other novels, “Summer of ’69” is full of details that evoke the exact feel, smell, and taste of the specifics of the locations. Although a year-round resident of Nantucket for the past 26 years, Hillderbrand’s first stop was the Vineyard. “I went to the Vineyard first in 1993. I visited a friend from college for two summers whose aunt and uncle lived in Chilmark, and that’s where I got my introduction to the Island.”
Lucky for her readers from both far and near, the Winnetu Oceanside Resort is offering a “Summer of ’69” extravaganza. Three days full of book-related events, visiting locations here on the Island, along with talks, beach walks, and more. Mark Snider, who along with his wife Gwenn owns the Winnetu, says of Hildebrand, “She is an incredible person and loves her fans, and they’ll just spend the entire weekend together. They will have all sorts of events, and trivia, and it’s lots of fun.” Snider emphasizes, “Elin wants people … with a common interest in her writing to experience the Vineyard, and to really have fun.”
If you want to step back in time, you can not only read “Summer of ’69” but also take advantage of the opportunity to experience a weekend with the author here on the Island.