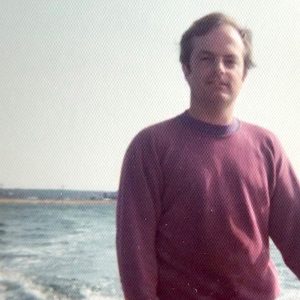 He graduated from the Tisbury School in 1958, and was an avid trumpet player in the All Island School Orchestra and the American Legion Drum and Bugle Corps throughout his school days. He went straight into the Air Force after high school, and trained as a mechanic, later becoming a crew chief of a fighter plane at the base in Goose Bay, Labrador.

While working as a research engineer at Monsanto in Springfield, he also studied and received his bachelor’s in mechanical engineering from Western New England University in 1981. He found his niche as an engineer in the area of instrumentation and process control, working at a variety of companies in the oil and gas and pharmaceutical industries, including Koch Refining, Jacobs Engineering Group, and MODEC. Through this work, he relocated to Texas in 1991. Fond of adventure, Mike also took the opportunity to spend two years working in Singapore, and go several times offshore to oil platforms in the Gulf of Mexico, both of which were highlights of his career.

Mike treasured growing up on the Vineyard, and his friends and family there. He was a great storyteller of the “good old days,” and also loved traveling in the U.S. and abroad. He was fascinated by all aspects of science, engineering, and technology, and was a lifelong learner, even trying his hand at hacking electronics in retirement. His positive attitude toward life, inquisitive nature, and words of wisdom will be missed.

He is survived by his wife, Lidia Almeida-Shea; his children Hilary Shea, Alison Shea, Jonathan Shea, Kristina Shea, and Melanie Shea; his grandchildren Elizabeth Shea and Joshua Shea; his great-grandchild Damon; first wife Janis J. Gilley; his brother Peter Shea and sister Julia Shea; as well as nieces and nephews. He is predeceased by his parents, Evelyn Dias Shea and Jeremiah Shea of Vineyard Haven.

There will be a celebration of his life on Nov. 23 on the Vineyard for family and friends. Please contact Lidia Almeida-Shea (lidia.almeidashea@gmail.com) for more information.