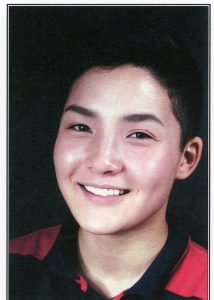 Davin was born in Kostanai, Kazakhstan, and adopted into the West Tisbury community at 14 months of age through his parents, Wayne and Kathleen Tackabury. With zeal and drive, he made his way through Island Childrens’ School, West Tisbury School, and ultimately Martha’s Vineyard Regional High School (where he was entering 12th grade at the time we lost him).

Davin was also a member of the family of the Kazakh Aul of the United States, an organization founded to create lasting cultural celebration and appreciation of the Kazakh community across North America, whether that connection be through adoption or expatriation.

Across those paths, and others through his island and Kazakh communities, Davin became blessed with his dearest fortune: the friends he made on his journey. His family and all of those most treasured friends deeply mourn his passing.

While Davin showed early gifts in gymnastics and dance, his prodigious command of visual arts directed his attention and boundless creativity toward photography and painting, going forward into his high school career.

Most particularly, Davin left a rich legacy in his photographic art, renowned nationally. In the National Scholastic Awards for 2018, Davin was awarded two gold and multiple silver awards, earning him an invitation to a recognition ceremony at the Scholastic Awards at Carnegie Hall in New York City. His work before and since then has been seen in showings on-Island, and in the pages of the Martha’s Vineyard Times and Martha’s Vineyard Gazette.

As an out and proud transgender male, Davin found and embraced in complete comfort his gender self. He was honored in his tragically short life as a spokesman for LGBTQ acceptance and sensitivity in public discussion groups regionally with teachers, college students, and other community members, where he presented a kind face and articulate voice on behalf of his youth LGBTQ kin.

In Davin’s memory, the family has requested contributions toward a scholarship being created in Davin’s name for exceptional achievements in photographic and visual arts through the M.V. Regional High School. Contributions can be made to the “Davin A. Tackabury Scholarship Fund,” and may be sent to Martha’s Vineyard Public Schools, c/o Marylee Schroeder, 4 Pine St., Vineyard Haven, MA 02568.