Robert Pieringer (“Bob”) of Waterview Farm in Oak Bluffs passed away peacefully on Oct. 17, 2019. He was 92. His family joined him at his bedside, and recollected happy memories. 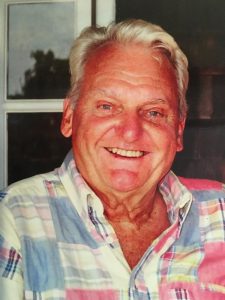 Bob was born in 1927 in Plainfield, N.J., the second child of Carl and Helen Pieringer. He was raised in Dumont, N.J., until he was drafted into the U.S. Army during WWII. While attending Dumont High School, he met the love of his life, Bertha Schirmer of Harrington Park, N.J., whom he would later marry. While stationed in Augusta, Ga., Bob played drums in the U.S. Army Band, and also earned his private pilot license, two loves he would pursue his entire life. At the end of the war, Bob finished high school in Point Pleasant, N.J. He continued his passion for playing the drums, forming his own big band known as Bob Perry and the Sophisticats. He liked to tell funny stories, and people were attracted to his charismatic personality.

Bob studied at the University of Maryland, but transferred to RCA Institutes in New York to follow his dream of working in the emerging field of broadcast television. On graduation day, Bob sought a position at CBS-TV in New York, but was told there were no openings. Not taking no for an answer, Bob waited until the end of day, when the boss emerged from his office, and after pleading his case, Bob got the job he wanted.

Bob witnessed the early days of television, first as a boom mike operator, and later as a cameraman and video engineer. His colleagues nicknamed him “Buffalo,” a name that stuck with him throughout his 40-year career at CBS. Bob experienced the excitement of producing live television shows, including “The Honeymooners” with Jackie Gleason, “The Ed Sullivan Show,” and the “CBS Evening News” with Walter Cronkite. He was also present at many historic events, including the Mercury and Apollo space shots, Masters Tournaments, Super Bowls, Olympics, and political conventions, including the 1968 Democratic Convention in Chicago, where tear gas came wafting into the production trucks. Bob received five Emmy Awards from the Academy of Television Arts & Sciences, including one for placing the first remote-controlled camera on a racecar in the Daytona 500.

Bob married his high school sweetheart, Bertha, in 1950, and eventually settled in Alpine, N.J., where he built a house and a pool. Bob was a mechanical wizard who could fix or build almost anything, from a car engine to a wooden dining table that he handcrafted. He was so adept at fixing things, his neighbors often called him on short notice to repair their televisions so they could watch their favorite programs like “I Love Lucy.” Bob was often away on TV remote assignments, but he still pursued his love of flying by joining the Paramus, N.J., Flying Club, and flew himself all over the East Coast, including the Vineyard.
Bob and Bertha raised four boys while in Alpine. They shared their love for travel and took the boys on ski trips to Mont Tremblant, Canada, a cross-country trip in a station wagon pulling a pop-up tent trailer, and sailing in the Bahamas and British Virgin Islands.

In 2002, after spending many summers on the Island, Bob and Bertha retired to a post-and-beam house that Bob built in Waterview Farm. They were members of Farm Neck Golf Club, and Vineyard Haven and Edgartown Yacht Clubs. Other Martha’s Vineyard organizations Bob belonged to include the First and Third Men’s Club, and First Congregational Church of West Tisbury. During the winter months, Bob and Bertha retreated to Harbour Island in the Bahamas and to Marco Island in Florida. They were also avid travelers who enjoyed cruises, which took them to the far corners of the world.

Bob was predeceased by his older sister, Elaine Leger, and by his wife of 63 years, Bertha. He is survived by four sons, Craig (Nan), Gary (Ann), Scot, and Wayne; and by five grandchildren, Sarah, Anna, Matthew, Andrew, and Amanda.

A memorial service is planned at the First Congregational Church in West Tisbury in June 2020.