The Martha’s Vineyard Regional High School (MVRHS) girls soccer team closed out the home schedule Saturday under the lights at Dan McCarthy Field with a senior night match to remember, rallying from 1-0 down early in the first half to tie Barnstable, 1-1, on freshman Ella Keene’s goal in the 57th minute.

All four seniors, Madia Bellebuono, Julia Dostal, Ava Vigneault, and Carly Uva, started the match, and each played well. Heck, everyone in purple did, and so did Barnstable, in what was a thoroughly entertaining Cape and Islands League Atlantic Division match between the Division 3 Vineyarders (3-10-3) and Division 1 Red Raiders (11-2-2).

Barnstable scored just 8:13 into the match on a rebound at the right post, but the Purple bounced back after the early setback, and played the Red Raiders even to the halftime break, forging several attacks into the Barnstable end and earning a pair of corners for their efforts.

The second half was even better. Both teams played up and down the pitch at a relentless pace. Barnstable’s Livi Varetimos fired the first salvo, whistling a 20-yard shot inches over the crossbar in the 50th minute. She blasted another laser from 25 yards out in the 54th, but Vineyard keeper Ruby Reimann made her first of three tremendous saves, diving to secure the ball at the left post.

The big save seemed to put an extra charge into the home side, and the Vineyarders grabbed their equalizer three minutes later. Klara Reimann started the play with a throw-in to Madia Bellebuono, who played the ball back to Reimann. Klara crossed the ball to the right corner of the box, and Ella Keene slotted the ball into the bottom left corner, triggering a jubilant celebration.

Barnstable had three good chances to regain the lead. Ruby Reimann stopped two of them, first by swatting a point-blank shot away to her left, and again to thwart a Red Raider counterattack. Ava Vigneault made the defensive play of the night on the third bid by clearing the ball out of the crease with five minutes to play.

Speedy Vineyard freshman Wadeline Florime Hall, who tested the Barnstable backline all night, as Maria Frangos did down the flanks, redirected a shot on net with three minutes left, but the Barnstable keeper made the sure save.

After the final whistle, the Vineyarders raced to embrace keeper Reimann and celebrated a well-earned point in front of the enthusiastic home crowd.

Back on the bench, before honoring his four seniors, Vineyard Coach Rocco Bellebuono praised his players’ effort, and wanted the experience of the evening to stay with them.

“I said, ‘Remember how you played tonight. What you left on the field right there is what you need to bring to it every time you play.’ They see it, but the consistency has been the hard part. Getting them to be able to connect like that every time that they come out, you know, individually prepared and then collectively able to execute, that’s been the biggest challenge, but it’s very difficult for anyone, for any team. I think they struggle with that sometimes, but they did great. To come back from 1-0 down in the second half and tie that thing up and we didn’t stop. We kept threatening, and it was beautiful. Had a couple of opportunities, played really well defensively, kept them from scoring a second [goal] and came away with a 1-1 tie. So, a 4-0 loss a couple of weeks ago to them at their place and suddenly, it’s 1-1. We can play against Barnstable, who’s top of the bracket, and tie them; they can play against any team in our league.” 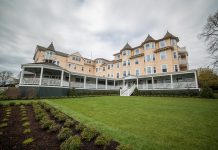