David A. Abrahams died on Saturday, Oct. 19, 2019, at his home in Greenwich Village, New York City. Next month he would have turned 93. 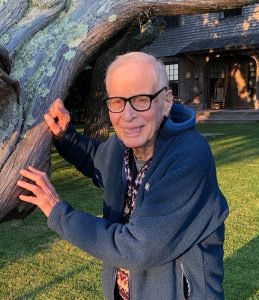 David was born and raised in Brooklyn, and spent summers in Vineyard Haven for the past six decades with his wife, Carole Cronig Abrahams, daughter of Henry and Mae Cronig.

Abrahams attended Syracuse University, and served in the Army Signal Corps at the end of World War II, with a deployment in Japan. He began his career as an accountant, then worked for more than 50 years as a stockbroker at Bache & Co., which became Prudential and finally Wells Fargo.

An avid athlete, his summer highlights were running the Chilmark Road Race with his family, “walking the Chop,” sunset views at the flagpole, and lobster rolls at Grace Church. He was a lifelong learner, after retirement as a member of the peer-learning group Quest, and a frequenter of the Island’s many summer concerts, lectures, and films, especially at the Hebrew Center. He enjoyed membership in the Print Club of New York.

David married Carole Cronig, then a public school teacher in New York City, in 1964. He is survived by her and by his son Fred (Natasa), his daughter Bess (Barry), and four grandsons.

In lieu of flowers, donations may be made in his honor to the Vineyard Haven library, where he spent afternoons doing crossword puzzles and reading the news: V.H. Library Building Fund, VHPL BFI, P.O. Box 4961, Vineyard Haven, MA 02568, or see vhplbfi.weebly.com/donate.html.

Why is this news? And, looking at the car, there’s plenty of room for her to back out. Problem solved. I back out of a tight space like that every day. And just because someone said he used racist language, doesn’t make it a fact. People lie on all sides every day. I wonder what the other party’s language was, maybe that’s why the video won’t be released? Anything’s possible.