Dr. Heinz-Helmer Puetthoff, 74, died Thursday morning at the Martha’s Vineyard Hospital, after an intense battle with leukemia. He had his loved ones at his side, and a crew of amazing medical personnel to help him. He was surely happy to be home on the Island before starting his final journey. 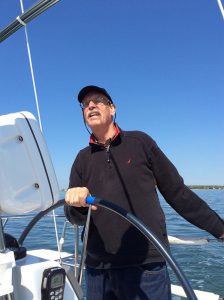 Helmer was born in Hemer, Germany, the first child of Heinz and Ursula Puetthoff. Upon graduating from the local “gymnasium” (high school), he began his pursuit of a law degree. He studied at the universities of Marburg, Speyer, and Freiburg, following the professors of law and their specific areas of study. His main course of studies, however, brought him to Muenster, where he passed the German bar exam and began work on his doctorate degree.

In 1971 that pursuit took him to Columbia University in New York City, traveling by ship across the Atlantic. On board he met a girl from Martha’s Vineyard with whom he would spend the rest of his life. In the summer of 1974 he married Jane Cunningham, and they returned together to Muenster, Germany, to spend the next 20 years building a career at VEBA, a family, and a large circle of dedicated friends.

In 1994 he was transferred to New York City to become president of the U.S. holdings of the company, soon to be renamed E.ON. He was active on the board of St. Paul’s Church in Manhattan, the Deutsche Verein, and the Leo Baeck Institute.

In the year 2000 he retired to the Island. He was always proud to be a “wash-ashore,” loving the Vineyard intensely. The family owned three sailboats along the way, the most recent a lovely cruising boat named Frisia, in honor of his maternal East Frisian heritage, of which he was especially proud. He was an active member of the sailing group CANE, where he had many friends.

Helmer was a highly intelligent man with a quick wit. He loved to discuss European politics with anyone, and his knowledge of German history was extraordinary.

Helmer was a loyal husband, an extremely proud and devoted dad to Jan, Niels, and Carolin, a generous and supportive big brother to Regine and Maike. He is also survived by cousins, nieces, nephews, and two grandchildren, who are as devastated by the loss of this wonderful man.

The family would like to thank the nursing staff of MGH for their help along the way, and although the stay at M.V. Hospital was a short one, the dedication, patience, respect, and dignity shown by the staff to Helmer and his family were extraordinary. A special thank-you to the night nurse Zoe and her assistants, and to Dr. Bello, for his kindness and understanding at this difficult time.

A funeral service will be held on Thursday, Oct. 31, 2019, at 11 am in Grace Episcopal Church, corner of Woodlawn and William streets in Vineyard Haven. Burial will be private.