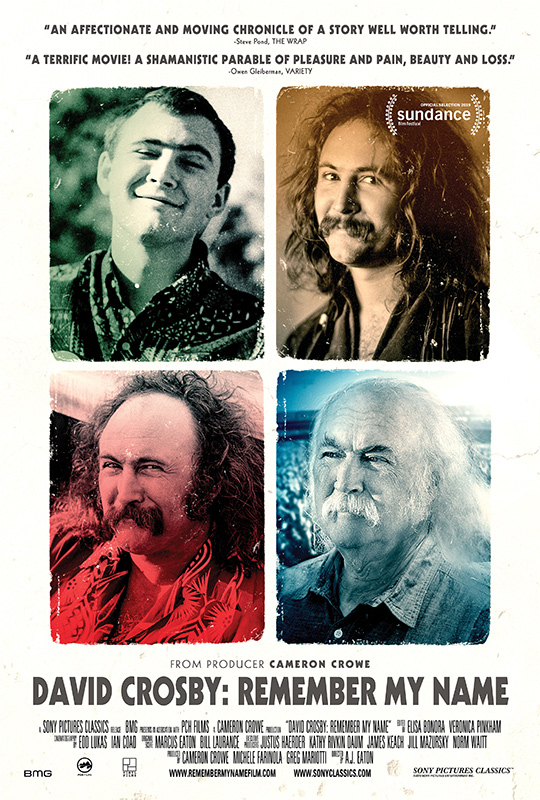 Playing at the M.V. Film Center, “David Crosby: Remember My Name,” takes the viewer on a trip back to the late Sixties with rock icon David Crosby. The film title is based on his album, “If I Could Only Remember My Name.” As a singer and musician, Crosby performed with the Byrds; Crosby, Stills & Nash; and Crosby, Stills, Nash & Young. The film is not a nostalgic tribute so much as a tough look at a great musician but a flawed man.

Now 78, Crosby has no contact with former band compatriots because of his abusive behavior. According to Graham Nash, Crosby ripped the soul out of Crosby, Stills & Nash. Crosby’s support now comes from his wife of 32 years, Jan Dance, who shared addiction problems with her husband. With eight heart stents, a liver transplant, hepatitis C and diabetes, he may not be long for this world, and he knows it. “I’m afraid of dying,” he admits.

A.J. Eaton, whose brother Marcus plays in Crosby’s current band, directs, and Cameron Crowe produced “David Crosby.” Crowe won an Oscar for “Almost Famous,” a fictionalized version of his life with the early Seventies musicians of Laurel Canyon, including Crosby, Stills & Nash. Crowe conducts many of the “David Crosby” interviews, his first at age 16 for Rolling Stone.

Crosby grew up in Los Angeles with an aloof father, Floyd Crosby, who won an Oscar for his “High Noon” cinematography. After the Byrds was formed in 1964, David Crosby joined as rhythm guitarist and singer. The group recorded Bob Dylan’s “Mr. Tambourine Man,” which quickly rose to No. 1 on the charts. Crosby’s outspoken political rants, including a conspiracy theory about the J.F.K. assassination, led to his dismissal from the Byrds. Subsequently he helped form Crosby, Stills & Nash, which performed live for the second time at Woodstock in 1969. Their first album that year, “Crosby, Stills & Nash,” was a hit, and Neil Young joined the band, which became Crosby, Stills, Nash & Young.

Crosby’s hit songs include “Almost Cut My Hair,” “Wooden Ships,” and “Guinevere.” Devastated by the death of his girlfriend Christine Hinton in 1969, he turned increasingly to drugs, becoming addicted to cocaine and heroin. He spent nine months in prison on drug and weapons charges in 1982, and has had other brushes with the law. Friction led to the end of Crosby, Stills & Nash in 2016.

Crosby’s first solo album, “If I Could Only Remember My Name,” came in 1971 with all-star backup by Young and Joni Mitchell, along with members of Jefferson Airplane, the Grateful Dead, and Santana. Crosby continues to tour and record despite serious health problems. “David Crosby: Remember My Name” lays out the musician’s life and career, primarily through interviews with him and archival footage of his performances and personal life. The film illustrates his talent and superstar status, as well as his charisma and contrary personality. It is a compelling cinematic portrait.