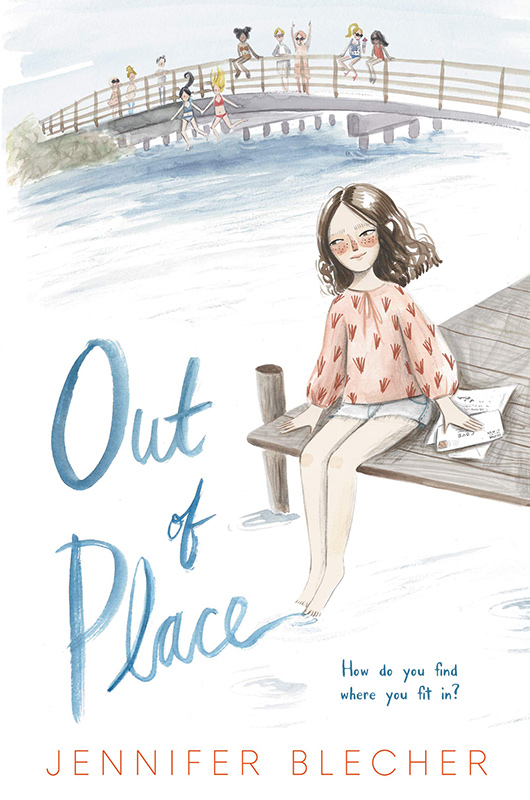 Jennifer Blecher’s young adult novel “Out of Place” might feel like a foreign world to outsiders but residents and fans of Martha’s Vineyard will fit right in. Blecher, an Island native, has penned a charming little tale about the appropriately named “Cove,” and her struggles to find her place in an ocean full of popular kids, quirky townspeople, a cool kid in black who becomes a “love interest,” and a mother who fears the mainland a little too much.

Sound familiar? The famous “Jaws Bridge” adorns the cover of “Out of Place,” and the food her mother makes consists of “lentils, falafel, kimchi, chard, and tofu.”

“Mom says that she’s seen enough of the world to know that what matters most is what’s inside your soul,” Cove confesses in an intimate first-person narrative. “And her soul gets all the nourishment it needs on Martha’s Vineyard.”

That’s cool with Cove — “Never leaving the island used to be okay with me.” But when her best friend and confidant Nina heads to New York with her two dads for Toby’s opportunity at the gallery (most of his pictures are of Nina), all of that falls apart. The lights and cavernous buildings of NYC intrigue Cove and the letters from her friend — offset and welcome with faux cursive fonts — only adds to the curiosity: “I got assigned this student mentor named Minnie (like the mouse) and her job is to show me around and introduce me to all her friends. She even saved a seat for me at her lunch table. And I got a phone!! -Love Nina”

With her partner in crime platooned on the mainland and the popular girls at school sporting “STAY AWAY FROM US” T shirts purchased from Amazon, Cove is forced to carve out a new inlet for herself. Characters the likes of Anna, who is teaching Cove to sew, arrive in spades. Jack, think a young Christian Slater in “Heathers,” fills in for Nina when he’s not at the skatepark. Jonah, the hip 20-something at the secondhand store, takes Cove under his wing. Even Mom picks up a new love interest in the form of Sean, a tattooed yoga instructor, whose namaste is here to stay.

The action intensifies when Cove pens a letter and sends a garment “borrowed” from Anna’s design for “Create You,” the “Project Runway”-like show that Cove steals peeks at when she’s at the secondhand store. The design is accepted. Of course, she needs to confess her plagiarism; the means don’t justify the ends, but it still finds her with that long-awaited trip to the big city and into Nina’s waiting arms.

It’s just like Eel Pond (Menemsha) again, and the two reminisce over times and places like Beetlebung Corner, the Ag Fair, and even the ubiquitous Dumptique. Mother and daughter are both forced to change and grow in the course of the story, coming to grips with the fact that change is the only constant, and that hiding in the cove of one’s own little world can sometimes be a suffocating cocoon. Even Jonah, the spiky-haired proprietor at the used clothing store, gets his big break and is leaving the Island by the end of the inspired tale.

It’s not that “Out of Place” breaks particularly new ground but the ground that it does break is both fertile and familiar, especially to Islanders.

“Mom takes a sip of green tea. ‘So, there I was, with this tiny precious newborn in my arms. And it was the thirteenth day of the twelfth month in the conventional calendar, which is the ninth sign on the Zodiac calendar. That means you were a Sagittarius, and Sagittariuses have a fire sign. They’re passionate and strong and creative. I looked at you, and even though you were so teeny, I could tell that you were going to be all those things.’”

It’s a lot for poor Cove to handle — not only her hippy-dippy loveable Mom, with the bracelets and the long curls, but the expectations that come with coming of age. With her best friend gone it’s even harder to come into her own, but somehow the universe provides.

“Love the questions now,” the 19th-century poet Rilke admonishes us, and maybe he has a point.

“Out of Place” by Jennifer Blecher, 224 pgs, Greenwillow Books/HarperCollins. Available at Edgartown Books, Bunch of Grapes Bookstore, Vineyard Haven, or at jenniferblecher.com.