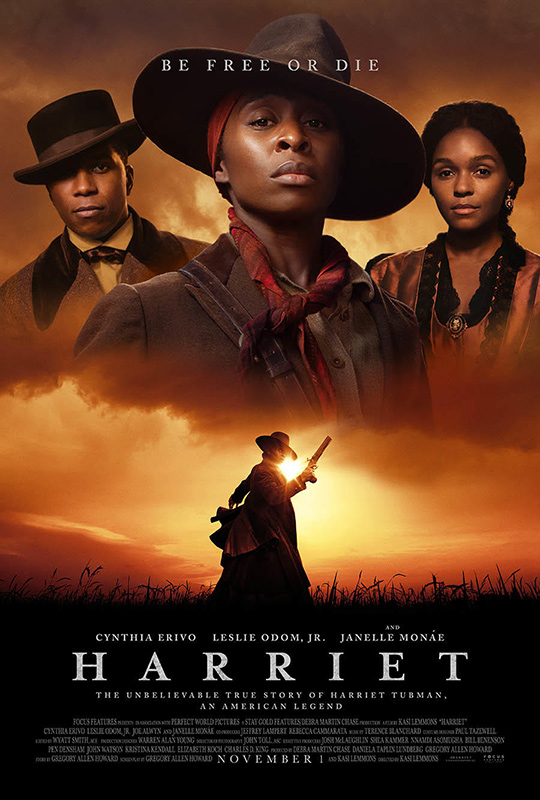 “Harriet,” a celebration of Harriet Tubman, is now playing at the M.V. Film Center. It’s about time Hollywood produced a film about this legendary black woman, who may replace Andrew Jackson on the $20 bill if President Trump doesn’t cancel the change. Not only did Tubman escape from slavery, but she slipped back to her Maryland homestead 13 times, rescuing 70 of its slaves, then became a heroic abolitionist, freeing over 700 slaves.

Directed by Kasi Lemmons, “Harriet” stars British actress Cynthia Erivo as the abolitionist with power and appropriate fierceness. Erivo won a Tony for her portrayal of Celie in the Broadway production of “The Color Purple.”

Beginning in the days when Tubman was known as Araminta “Minty” Ross, the film shows her having one of the visions that marked her life. They were thought to be caused by an accident when she was 13 years old and a white store owner threw a two-pound lead weight that caught her on the forehead and broke her skull.

She and her husband, John Tubman (Zachary Momoh), hired a lawyer (and does so in the film) to persuade her Maryland owner, Edward Brodess, to give her the freedom promised by Brodess’s father. He ignores the request and forbids John Tubman, a free man, to be with his wife. After Brodess’s death, his son, called Gideon (Joe Alwyn) in the movie, plans to sell Minty, so she decides to escape with her husband to Philadelphia. The journey is harrowing, and fearing for his safety, she leaves her husband behind. Chased by hounds and with a $300 reward on her head, Minty escapes by jumping from a bridge into a roiling river.

With help from a free black preacher, who is based on the actual Rev. Samuel Green, Minty, now called Harriet (after her mother) and Tubman (after her husband), reaches Philadelphia. There she meets William Still (Leslie Odom Jr.), the abolitionist, who is (and was) a conductor on the Underground Railroad and member of Philadelphia’s Anti-Slavery Society. Along with free black and rooming house owner Marie Buchanon (Janelle Monáe), he takes Harriet under his wing, makes her an Underground Railroad conductor and supports her efforts to free slaves.

Her success in that effort leads white slave owners to call Harriet “Moses”, because she sings “Go Down Moses” to slaves. Owing to her success and frequent disguises as a man, slave owners think she’s a white abolitionist wearing blackface. In two of the film’s more interesting details, several black slave hunters aid the Brodess family in hunting down Harriet, and she carries a pistol to use against white slave owners, as well as reluctant escaping slaves. By 1863, with the Civil War raging, Harriet became a Union spy and scout who helped organize a Union Army raid at the Combahee River, if not its leader as the film suggests.

If Tubman has not yet achieved the kind of national recognition she deserves, “Harriet” should help change that. The film may mix fact and fiction, but Erivo brings the heroine to life, as does the film.

Lighting up the fall