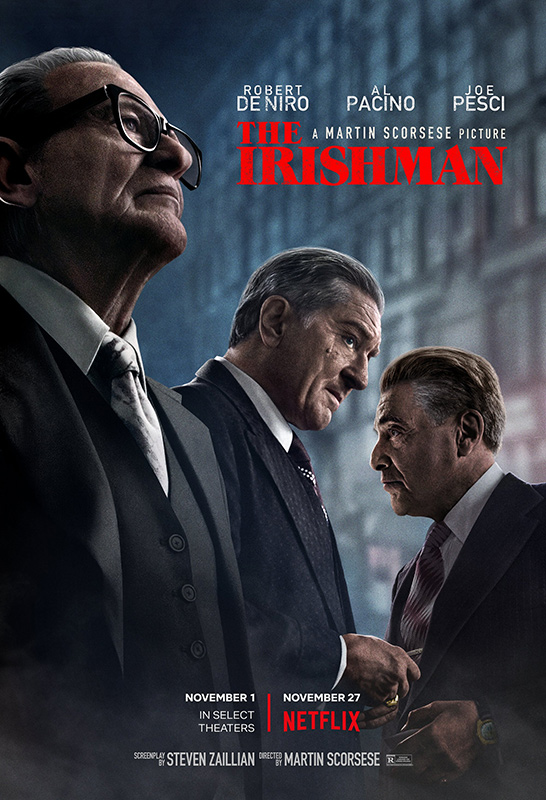 Martin Scorsese’s latest film, “The Irishman,” comes to the M.V. Film Center this weekend. Among this director’s greatest films, it is a haunting portrait of the American Mafia, and

Scorsese has often been criticized for his neglect of female characters, and, except for Anna Paquin as Sheeran’s daughter Peggy, they remain minor characters here as well. But this story focuses successfully on a quintessentially male world, so the women don’t belong front and center. It’s a world in which men serve as each other’s family, and Peggy illustrates the toll it takes on women.

Not one for cinematic fireworks here, Scorsese tells his tale of gangsters and Teamster president Jimmy Hoffa without flashy touches, reflecting how these men are neither entirely exceptional nor heroic. Murderers and crooks, yes; but human beings first. The director has a knack for making such characters remain ordinary yet vividly memorable.

“The Irishman” offers viewers a world based on real people, operating in the context of the era’s real events: the heyday of the Teamsters Union; the Bay of Pigs disaster; the Cuban Missile Crisis; the assassination of President Kennedy.

The prime character is De Niro’s Frank Sheeran, the Irishman of the title, and viewers meet him wheelchair-bound in a nursing home at the end of his life. A WWII vet, he served in Italy, and learned to speak Italian there. As a result, Italian crime boss Russell Bufalino takes a shine to him. Sheeran has been working as a truck driver, and he starts “painting houses” for Bufalino, Mafia jargon for murder. Although taken from the book, the phrase illustrates Scorsese’s gift for constructing gangster dialogue that’s colorful, authentic, and understandable. Fifties classics like the Five Satins, singing “In the Still of the Night,” waft through the background.

Bufalino passes Sheeran on to Jimmy Hoffa, to work as his bodyguard and companion. Sheeran’s relationship with the volatile union leader, played to the hilt by Pacino, grows close, with the two sleeping next to each other in twin beds. In another context, that might seem homoerotic. Hoffa takes center stage for a while, with a watchful Sheeran always nearby. A high point of the film comes when Hoffa “disappears,” the famous 1975 event the movie takes a stand about.

The narrative slips back and forth adeptly, from Sheeran in the nursing home to his work for Bufalino, his auto trip with him and their wives, and his time with Hoffa. The camera freezes periodically to caption the circumstances and demise of some characters. Vintage cars provide a visual treat.

Through the magic of digital technology, the characters have had their features transformed from relative youth to middle age and on. They inhabit their roles comfortably and with finesse. De Niro, who won Oscars for “Raging Bull” (1980) and “The Godfather, Part II” (1974) as well as five nominations, tops them all. His face is a haunting map of all that is happening.

At a satisfying three-and-a-half hours, “The Irishman” invokes a much larger world than that of the gangsters it portrays. It depicts how these characters grow, change, don’t change, age, and often die. In so doing, it offers a deeply American tale.

For nformation and tickets for “The Irishman” and other films playing at the Film Center, the Capawock, and Edgartown cinemas, see mvfilmsociety.com and entertainmentcinemas.com/locations/Edgartown.