Shirley J. (Tankard) Robinson died peacefully on Friday, Nov. 29, 2019, at the Martha’s Vineyard Hospital, surrounded by family and friends. Born on March 26, 1936, in New York City to George V. and Audria B. (Thomas) Tankard, Shirley was the eldest daughter in a family of 10 children. 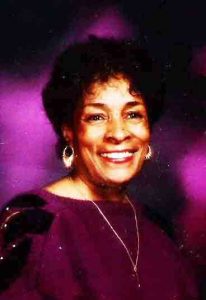 When the Tankards moved to Roselle, N.J., Shirley attended Abraham Clark High School. Following a move to Newark, she met and married Ralph F. Robinson. They had three sons, Ralph Jr., Michael, and Robert (“Fuzzy”), and a daughter, Gayle, who died shortly after birth.

In October 1965, Shirley moved to the Vineyard with her sons to begin a remarkable journey in a new role as single parent: her first job as a staff member of the Wood Chips Gift Store. Weekend nights found her “cheffing” up burgers and frappés to Island teens at the Youth Center. After taking several courses at Simmons College, she secured the position of assistant director of the center, alongside Doug Fortes. Shirley eventually became director at the urging of Tom Bennett, who had worked with Shirley previous to his founding the Counseling and Mental Health Services Program at Martha’s Vineyard Community Services (MVCS).

At the Youth Center for 17 years, Shirley really came into her own. She became a true mentor and friend, encouraging and supporting so many Island adolescents. While working for MVCS, Shirley became deeply involved in various fundraising efforts: Red Stocking Fund, Possible Dreams Auction, Annual Chowder Fest, and volunteering at one of her favorite places — the Thrift Shop.

Shirley invented herself again when she began work at the Tisbury Elementary School as assistant cook with Sheila Decosta. She eventually replaced Sheila as head cook, and put her unique culinary talents to work. She quickly earned the coveted and beloved title of “Lunch Lady.” Fortunate are they who have tasted her cooking, especially her famous mac and cheese. After 15 years of dedicated service to the children and staff at the Tisbury School, she retired her “Lunch Lady” crown in 2001. She continued feeding the community during the Tisbury Street Fair for 15 years, working alongside her mom and sisters, who supplied the Vineyard’s Best Fried Chicken every year to sellout crowds.

Volunteering and cooking were fond activities, but Shirley’s biggest passion was her family. She worked hard to ensure that her sons had the best education that she could provide, and her grandchildren — her true pride and joy — brought her immense joy and fulfillment.

Her favorite hobby was scouring yard sales in search of the ultimate deals. After careful preparation and planning her route so as not to waste precious time, she would haggle and cajole for the best price, taking great pride in her discoveries. Many a friend or family member found an “experienced treasure” on the doorstep — Shirl was generous and thoughtful in that way. If you were favored to be in her presence anywhere you might meet her on the Island, you were wrapped in the love she shared with everyone. She basked in the blessings of the love and gratitude you all gave her in return. Our Island community will miss the love, laughter, and wisdom that she shared so willingly.

Shirley was predeceased by her parents, George Sr. and Audria Tankard, and her brothers, George Jr. and Reginald Tankard, her son Robert (“Fuzzy”) Robinson, daughter Gayle, and daughter-in-law Anita Robinson. She is survived by her sons, Ralph Jr. and Michael Robinson, and daughters-in-law Jodi (Michael) and Karen Blake-Robinson (Robert); and by grandchildren Jason, Christian, and Alexandra Robinson. She is also survived by her sisters Merle Beaulieu, Patricia Tankard, Myrna Araujo, Brenda Tankard, Audria Tankard, Carol Giosmas and husband, George; her brother Robert Tankard and wife Donna, along with a multitude of nieces, nephews, great-nieces and -nephews, and great-great-nieces and -nephews.

Visiting hours will be on Wednesday, Dec. 4, from 4 to 7 pm at the Chapman, Cole, and Gleason Funeral Home. Services will be held at St. Augustine Catholic Church in Vineyard Haven on Thursday, Dec. 5, at 11 am. Burial will be in Sacred Heart Cemetery, Vineyard Ave., in Oak Bluffs. A reception will follow at the P.A. Club.