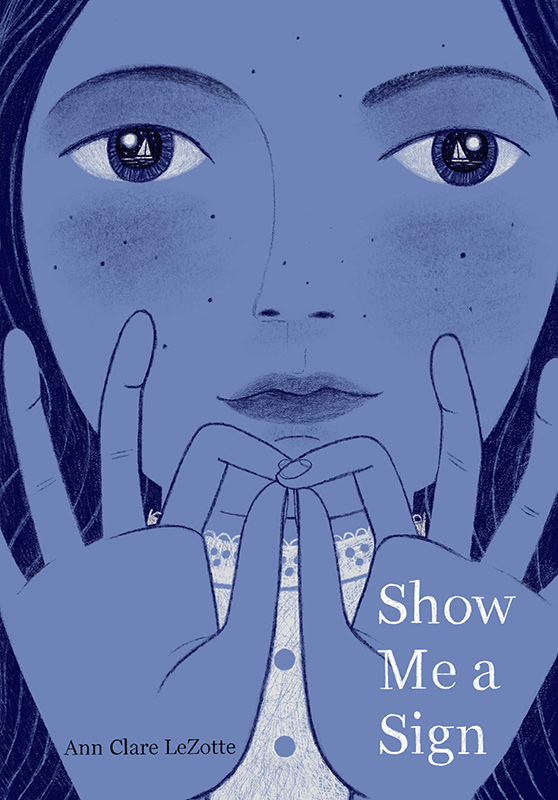 More happens to 11-year-old Mary Elizabeth Lambert in a single year than many of us experience in a lifetime. Ann Clare LeZotte’s novel “Show Me a Sign” is an unusual coming of age tale — a remarkable story, and although aimed at middle schoolers 8 to 13 years old, engaging for all ages.

Mary lives in Chilmark in the early 19th century — a time where Chilmark had a notably high percentage of deaf folks, both in the novel and in real life. Chilmark’s prominent deaf community dates all the way back to the 1640s. In LeZotte’s afternotes, she mentions that one in every 25 people were deaf in Chilmark, versus one in 6,000 on the mainland. Many families had mixed hearing and deaf members, but most remarkably, everyone “spoke” Martha’s Vineyard Sign Language (MVSL).

The storyline is infused with nuances that rip at the seemingly idyllic nature of the community. There is insidious prejudice between some of the white European descendants and the Wampanoag Tribe over land rights, a black freedman who turns to the Wampanoag people for acceptance because white citizens reject him, and general disdain for all Irish immigrants.

But in Mary’s own life, the recent death of her older brother is most prominent, and has left her family shattered. She carries unmitigated guilt, feeling responsible for having lured him onto the road, only to be crushed by an oncoming horse and wagon.

But nothing impacts Mary’s life as much as the incursion of a scientist who is determined to find out why there are so many deaf people in Chilmark. He insults the community with his assumptions that being deaf is an affliction. He interviews Ezra Brewer, a member of the community: “My dear sir … do you have a notion as to how your infirmity came to be so widespread in these parts?” Mary, watching this exchange, offers a response, “Deafness is not an affliction. The only thing it stops me from doing is hearing.” Neither she nor anyone in the community, hearing or deaf, considers deafness a disadvantage.

But Mary will soon discover that the scientist is capable of doing far more than offending people. She becomes his “live specimen” in a cruel experiment that threatens her survival.

LeZotte, who is deaf herself, skillfully uses words to paint a picture of what it’s like living without sound. She describes the way Mary deciphers if anyone is home: “I can detect Mama’s footsteps upstairs. When the house is alive with activity, I sense vibrations through the wooden floors. Otherwise the house feels silent.” Mary continues: “I love words, but they confound me too. The way my mind thinks is not just in signs or English words and sentences, but in images and a flow of feeling that I imagine resembles the music I’ve never heard.”

LeZotte explained the inspiration behind her novel. “I lived on Cape Cod in the 1990s,” she said. “On my first trip to the Vineyard, a cab driver from the airport to the [then] Daggett House Inn in Edgartown told me about the Island’s history of deafness. I became immediately fascinated. I visited the Bunch of Grapes Bookstore in Vineyard Haven. I bought the one study on hereditary deafness, and some other local publications.”
She became inspired by what she read. “It’s an important chapter of deaf history in America, and aided the creation of a national sign language,” LeZotte said. “This remarkable community over 200 years ago teaches us that deaf and hearing people can coexist as equals, without communication barriers. We can learn from them in creating a disability-inclusive society today.”

LeZotte says, “My wish for deaf readers is to recognize the main character and feel seen and represented. My wish for hearing readers is to see the world from a perspective they may never have thought of before. My wish for all readers is to question: Is Mary’s deafness the problem, or is it the way society reacts to her ‘affliction’?”

LeZotte decided to write for the 8- to 13-year-old audience because of her experience in library youth services. “I believe this is a magical age for readers,” she said. “They’re still open to learning new things and seeing the world from a multitude of perspectives. I love that books are accessible in some format to every child without judgment.”

LeZotte adds, “I am often asked by children at the library where I work if I wish I could hear. I’m comfortable being deaf. I have been completely deaf for most of my life. This is how I experience the world, and I wouldn’t change it. ‘Show Me a Sign’ is ultimately about accepting who you are and understanding each other’s differences.”

“Show Me a Sign,” by Ann Clare LeZotte, Scholastic Press, will be available online on March 3, 2020.

Level the playing field for all student athletes