Teresa Jaworska passed away quietly on Nov. 23, 2019, in Windemere. It was the end of a long journey that began in Poland over 95 years ago. 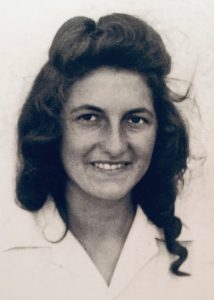 Her last 22 idyllic years on Martha’s Vineyard were in stark contrast to the nightmarish landscape of her youth. Poland had been invaded by both Nazi Germany and Soviet Russia in 1939, when Teresa was 15. With all civil rights stripped away under occupation, daily life was perilous. Teresa and her friends defied strict Nazi laws and organized underground classes to continue their schooling.

By 17, Teresa joined the Polish Underground Army, took a pseudonym, “the Owl,” and fought in the 1944 Warsaw Uprising. She saw fierce guerrilla-style street battles, starvation, death, and destruction. Teresa and her partisan fighters were arrested and taken prisoner by the Germans. Surviving prison, they were taken to Italy after liberation to heal and finish school. Afterward, she immigrated to England. While studying textile art and design at Blackburn College, Teresa met her future husband, Zbigniew Jaworski, also a war refugee. Together, they immigrated to the U.S. in 1950, arriving in New York on the Queen Mary with a baby, $90, and a suitcase full of dreams.

America was a welcome change, but not without its struggles. Teresa’s life was full with family, close friends, the pursuit of academic dreams in literature, and her love of the natural world. Predeceased by her husband, Teresa is the beloved mother of four children, Basia Jaworska, Anna Dye, Andrew and Christopher Jaworski; her grandchildren, Juliana, Adam, and Thomas Dye, David, Briana, and Colin Jaworski; and great-grandchildren, Ariana, Aveline, and Abraham Dye. Her love of walking (she was often seen walking Vineyard Haven with her daughter Basia), reading, classical music, singing, and gardening stayed with her to the end. She led by example. Teresa remains an inspiration for all to fight for what is right and humane, be civic-minded, and above all, kind.