It all started 16 years ago in Ocean Park, when Mark Crossland saw promise in the picturesque landscape of green grass, where children would play and dogs would chase Frisbees throughout the summer.
Crossland, owner of Crossland Landscape, wanted the park to be the centerpiece of Oak Bluffs, even in the wintertime; he thought the park was too special to be left vacant during the off-season.
And with that notion in mind, he strung up some of the first lights around the black lampposts with their glowing orbs.
The setup started with just a few scattered decorations, and has grown to about 70 different pieces, ranging from a floating star of twinkling lights to massive trees made of different-colored lights. “I wanted to make the display more magical, and since there aren’t any big pines in the park, I figured I would make my own,” Crossland said.
The trees are made from a tall pole with light strands hanging down to the ground, so when the display is turned on, the lights form the shape of a large tree.
Every year, Crossland looks at what he can do to make the display even more grand. “I have taken care of this park since 2003,” Crossland said. “That’s 15 years, and every year I try to make it better and better.”
The most recent additions to the display are lights strung around the flagpole near the bus stop, as well as a few more light-trees spread about.
The display is turned on every Friday, Saturday, and Sunday at around 4 pm, and stays on until 10 pm. The lights flash and dance around the park, but Crossland said the experience wouldn’t be complete without the Trans-Siberian Orchestra to tie it all together.
Starting in 2012, folks could tune to 88.5 FM when they were at Ocean Park to hear the American rock band play along with the flashing lights. There are two speakers atop the bandstand that play the music as well, but for spectators who want to stay cozy and warm in their car, the FM station is the perfect solution.
This labor of love is a “huge project,” Crossland said. He explained that there are about 2.5 miles of weatherproof extension cords running from the power conduit inside the bandstand to the many different LED displays throughout the park.
LED displays take up the least amount of amperage, Crossland said. But the large trees aren’t LEDs — they use normal bulbs — so they are connected separately to outlets on various lampposts in order to free up power from the conduit.
And the technical know-how necessary to create a massive show like this isn’t common for the average holiday fanatic. But with 42 years of landscape and landscape design experience, along with a passion for ham radios and an extensive understanding of electrical work, Crossland said the project “comes naturally” to him.
Crossland said he programs an SD card with the rock Christmas music on it, and enables it to switch between connections so the lights follow along. “The programming determines which lights turn on, depending on what part of the song is playing,” Crossland said. “Like if a guitar solo starts, maybe the purple lights come on, and others go off — it’s pretty complicated.”
Crossland said he’s had trouble in past years with vandalism and some strands of lights being pulled down. But this year, he said, he hasn’t had that issue.
The Crossland landscape crew are the ones who set up the lights and make the park come to life, which Crossland said he is grateful for. “My guys do a great job, they are the ones who make this all possible,” he said. “They work hard to get all this up in time for the holidays, I just tell them where everything goes and how to space out the lights.”
Crossland looks at a map of the park every year, and brainstorms new ideas for the light show, then puts his plan into action.
So far, Crossland said, he has had nothing but positive responses from the community and the town. “Everyone is very supportive, and people really seem to love the lights,” he said. “I love the town of Oak Bluffs, and I like doing something special for it. It draws people into the town to enjoy something pretty unique.”
For Crossland, creating the display every year is something he loves to do: “It’s just so much fun, I look forward to doing it every year. I love it so much that it doesn’t even seem like work.” 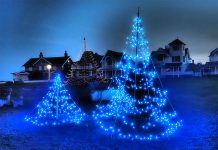 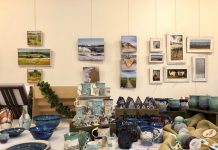 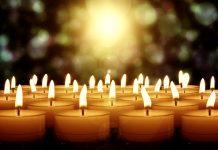