A bit larger than a blue jay, belted kingfishers are chunky birds with a scraggly crest on their head that gives them their regal name. Blue-gray above and white below, males are marked by a gray breast band; females, a bit larger than males, also sport a rusty band lower down on their bellies, making the sexes easy to distinguish in the field. On a kingfisher in flight, white patches are visible in the wings, and this species frequently calls — a loose, rattling cry — when in flight, making it easy to notice and identify.
The belted kingfisher is the only widely distributed kingfisher in the United States (a couple of other species occur either routinely or as vagrants in the deep Southwest). And their distribution truly is wide: They breed through most of the lower 48 states north to Labrador, southern Hudson Bay, and central Alaska.
In fall, the species migrates southward, though it’s an irregular movement. Wintering birds may remain as far north as mild coastal areas of Alaska or may retreat as far south as Central America or the West Indies. Cold weather appears to be of little concern to a kingfisher, at least until all the water freezes up. At our latitude, birds are present well into early winter (a few invariably turn up on the Vineyard Christmas Bird Count) and sometimes longer.
While kingfishers eat nearly any small aquatic animals they have a convenient shot at, small fish make up the vast majority of their prey: On the Vineyard, this probably means sticklebacks, killifish, and silversides, since these birds often forage over the brackish waters that support these fish. Typically kingfishers rest on perches until they spot a school of fish, then take flight, hover to line up their target, and plunge beak-first into the water to seize their victims.
I am amazed by the consistency with which kingfishers hit their targets. Experts assure us that one reason small fish school up is to complicate the work of predators: When alarmed, the orderly fish school scatters into a random blizzard of sprinting targets, so that the predator must press home its attack in a distracting and chaotic environment. But this tactic doesn’t seem to deter a kingfisher very often. I have no explanation except to note that, somehow, they keep their focus, track their intended target, and very often score.
Equally impressive is the ability of this diving hunter to catch fish in shallow water, sometimes just a few inches deep, without either injuring itself or burying its beak in the mud. I expect that the bird puts the brakes on before impact, flapping backwards just before impact to slow down. I’ve never been able to observe any such behavior — if it happens, it’s too quick for my eyes — but again, the birds succeed, so they must have some secret.
Kingfishers don’t look especially efficient in the air. Their stubby bodies aren’t well streamlined, and kingfisher flight (this is a useful ID cue) tends to be undulating, with bursts of wingbeats driving the bird uphill and then a pause letting it glide lower. But their short, blunt-tipped wings must be powered by a righteous set of muscles: Kingfishers hover readily for as long as it takes to line up an aquatic target to dive at. And these birds occasionally display impressive vagrancy: there are records, for example, from Ireland to the east and Hawaii to the west of this bird’s normal range.
Scraping with their claws and using their long, stout beaks like a pickaxe, kingfishers dig burrows, sometimes lengthy ones, into waterside bluffs for nesting. These tunnels are said to sometimes stretch for more than ten feet — that’s a lot of excavating for a smallish bird — and, often, to slope upward, which is thought to offer a defense against flooding by allowing an air pocket to form at the tunnel’s deepest, highest point if water rises to the mouth of the burrow.
On the Vineyard, these preferences basically limit the nesting of this species to relatively small portions of great pond shores. I suppose they could also nest in coastal bluffs facing the ocean, though I’ve never heard of this happening and in general, the species seems to prefer fresh or brackish water to the more saline ocean. I’m hard pressed to make a meaningful estimate of the Island’s breeding population, but the number is small: ten pairs, maybe?
Numbers grow during migration, but not by much; this is not a bird that is ever truly numerous, here or indeed anywhere else, and I can’t recall ever seeing more than about four or five individuals of this species in a day. On the other hand, kingfishers are reliably present all year unless we hit a deep freeze; if you visit the shallow, sheltered waters this bird prefers, you’re unlikely to miss it, even as winter sets in. 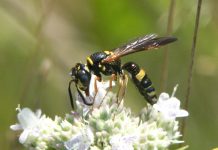