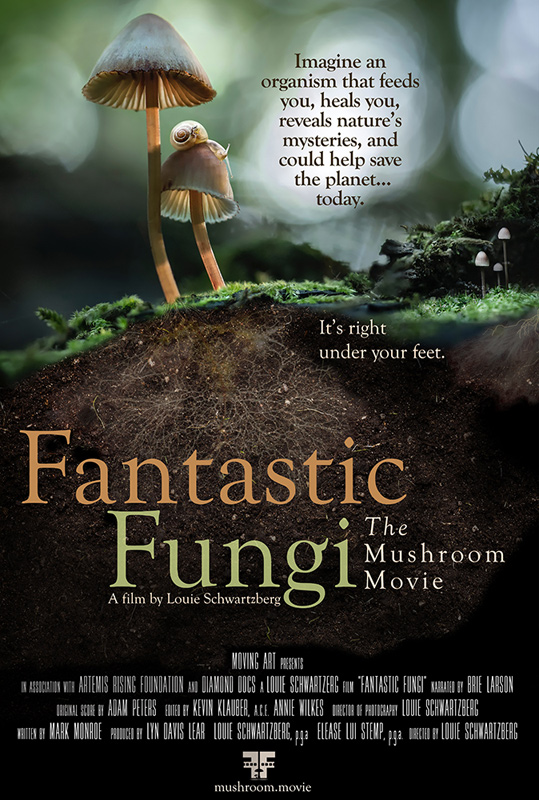 The documentary “Fantastic Fungi: The Mushroom Movie” comes to the M.V. Film Center on Jan. 10. It will surprise and amaze viewers. Who would have thought something as apparently insignificant as fungi and the mushrooms they produce could play such an important role in the world.

Director Louie Schwartzberg and writer Mark Monroe (who won a Best Documentary Oscar for “The Cove”), use dazzling cinematic devices to make their film visually interesting. Those devices include time-lapse photography and kaleidoscopic images, as well as interviews with such prominent experts as celebrated author Michael Pollan, science and food writer Eugenia Bone, and alternative medicine doctor Andrew Weil. Actress Brie Larsen narrates, and mycologist Paul Stamets explains the importance of fungi and their vegetative part, known as mycelium. The film explodes with the complex uses of fungi and mushrooms.

Fungi are vegetable/animal hybrids, and 1.5 million species of fungi exist, of which 20,000 make mushrooms. They break down plant life and act as the digestive force of the plant world. Mycelium, or fungi threads, create large underground colonies and perform tasks like helping trees communicate with each other. The most common species support life, inhaling CO2 and exhaling oxygen.

Dr. Weil suggests that two million years ago, psychedelic mushrooms helped create the human cortex expansion which led to the development of human beings as we now know ourselves. Mycelium fossils have been found in South Africa and Brazil.

An early use for fungi and mushrooms came from the Mayans, who used fungal psychedelics for spiritual experiences. Alexander Fleming’s discovery of penicillin mold’s use as an antibiotic with its enormous impact on human health even helped win World War II. Up until the 1960s, medical research pursued the uses of psychedelics. Then such research became frowned on. More recently, though, research has resumed. Psilocybin has been used to alleviate Post Traumatic Stress Disorder and depression, as well as to help dying patients deal with the fear of death. There have also been studies with religious leaders and mushroom images from the film were projected on St. Peter’s Basilica in 2015 in conjunction with Pope Francis’s support for the Paris Agreement. Studies at Johns Hopkins have led to a new center for psychedelic research there.

Stamets runs a number of mushroom and mycelium-based companies, including Fungi Perfecti, and has authored six books on the subject. He believes mushrooms cured his stuttering and he describes the experience of his mother, who was diagnosed with stage four breast cancer. She was treated with the anti-cancer drugs Taxol and Herceptin, as well as Turkey Tail mushrooms, and became cancer-free. Stamets believes the mushrooms helped the chemo-therapeutic drugs work better.

The amount of information about fungi and mushrooms in this film is almost overwhelming but “Fantastic Fungi” is well worth watching to sort through this fascinating field.