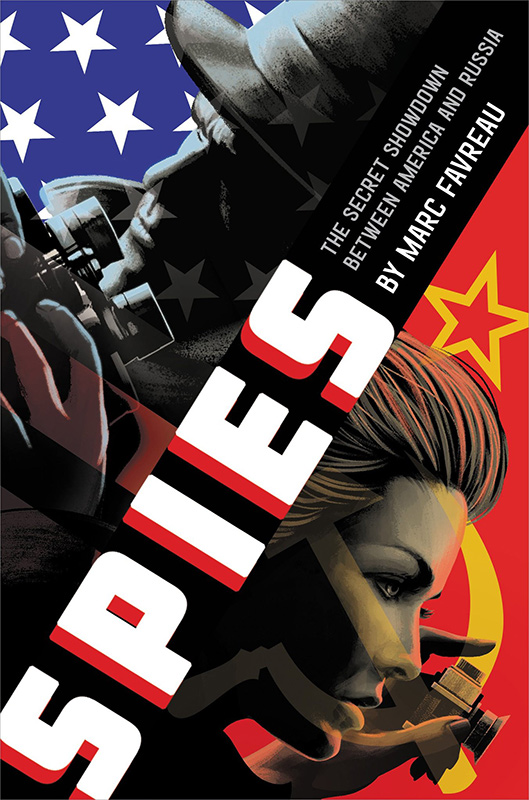 While working for the CIA as a mid-level agent, Aldrich Ames once left a briefcase with confidential material in it on a New York City subway. A misstep like this, one might think, would be a career-ending move for a CIA agent, but in the 1970s it apparently wasn’t. In spite of the subway incident, and other episodes of buffoonery not fit for a spy, Ames continued working at the CIA, and then some. “From 1985 until 1994, the KGB paid Aldrich Ames more than $2 milliion. For nine years, Ames delivered to the Soviets a steady stream of secrets, betraying more than one hundred CIA operations against the KGB. In forty years of battling against the CIA, the Soviets had never garnered so much intelligence from a single secret agent,” writes Marc Favreau in his fascinating new book “Spies: The Secret Showdown Between America and Russia” (Little, Brown Books for Young Readers).

Favreau, a West Tisbury resident, reveals the remarkable stories of defectors and double agents, as he vividly captures some of the greatest acts of espionage committed in the 20th century. “Spies” is Favreaux’s second book written for young readers. His first book, “Crash: The Great Depression and the Fall and Rise of America,” was published in 2018 to stellar reviews and best books of the year lists. “Spies” follows Crash’s lead. It was named one of “25 Best Children’s Books of 2019” by the New York Times, and reviewers are writing things like “Ian Fleming couldn’t have dreamt up anything better” (Kirkus) and “Favreau offers up a measured, exquisitely researched slice of history” (Booklist).

“Spies” was written with young readers in mind, and is meticulously researched and well-written. Since it covers a topic that readers don’t age out of, the book has what publishing industry professionals like to call “cross-over appeal.” While some of the names and spy stories Favreau writes about will be familiar to adult readers, not all of them will be, at least they weren’t to this reader. Like the story of Elizabeth Bentley, an unassuming American citizen and Soviet asset, who in 1945 walked into an FBI office in New Haven. Favreau reveals: “Over the course of a two-hour interview, the startled FBI agent could not decide what to make of this strange woman. She let out her story in dribs and drabs. Her motivations were unclear. It took several meetings for her to get up the courage to reveal her whole story — but when she was ready, Elizabeth Bently unfurled an almost unbelievable account of a massive Soviet espionage ring operating inside the United States.”

After reading “Spies” I reached out to Favreau with a few questions. If you have additional questions, which I suspect you will, you can ask him in person at the West Tisbury library on Jan. 25 at 3:30 pm, where he will be discussing “Spies.”

The research is so meticulous, and there are so many interesting details in the book, I suspect this is a subject you’ve long been interested in. I’d like to hear a bit about your research?

I wanted to tell this history from as many first-person perspectives as I could find. So in addition to doing a ton of reading and research in the history of espionage, I relied heavily on the large number of memoirs with ex-spies on both sides of the conflict. These are less well-known now, but there is a surprisingly large number! Two that stand out for me are Francis Gary Powers’ account of his being shot down over the USSR and his subsequent trial and imprisonment, as well as a really excellent memoir by the first female CIA covert agent to be sent against the Soviets, Marti Peterson’s “The Window Spy.” There is also a surprising amount of publicly available information from the CIA. Soviet sources are more difficult to navigate, but I did rely heavily on scholarship on the KGB’s history and activities.

What inspired you to write this book for young adult readers?

I am a longtime obsessive of spy fiction, everything from John le Carré to Jason Mathews. And I also read widely in the history of espionage and the Cold War. There was never really a question for me that I would write a book like this, but I think what finally nudged me towards it was the Trump-Russia investigation, and more generally the evidence of Russian meddling in U.S. elections. I think to understand and grapple with these hugely important issues, young people need to understand the deep backstory, the long history of covert hostility and espionage campaigns between the U.S. and Russia.

How long did you work on the book?

It took me a little less than a year to generate the first draft, then another couple of months working with my editor to get it just right. I have the most amazing editor at Little, Brown, Lisa Yoskowitz. I’ve been a book editor myself (at the New Press) for nearly 20 years, and I learn something new from her about the craft every time.

Any surprises since publication?

Well, pre-publication first: I was able to get a couple of jacket blurbs from a senior CIA agent and a former CIA Director — that was incredibly exciting for me. I did a reading on publication day at Politics and Prose in DC, and I signed books at the Spy Museum that same day. But the biggest thing for me was making the New York Times list of Best Children’s Books for 2019 last week. It kind of made my head spin.

Are there any spies that you know of in your family?

Lastly, there are no spies in my family that I know of! But a number of ex-CIA folks live on the Vineyard, and I did receive some help with access to my sources from them.

Shop local and pick up “Spies” at the Bunch of Grapes Bookstore in Vineyard Haven or Edgartown Books in Edgartown.