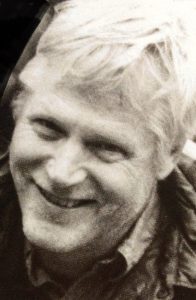 David was born on Oct. 2, 1956, in Syracuse, N.Y., while his father, John, was in a graduate journalism program. David’s parents then moved the family to Oklahoma, his father‘s birthplace, for his preschool years. In late 1960 the family moved to Washington D.C., arriving in time for JFK‘s inauguration and living in the shadow of the Capitol during the Kennedy and Johnson administrations. David and his sister, Camilla, attended one of the first integrated public schools in Washington, D.C.

David was a serious student of the Civil War, mastering all of the details of battles and skirmishes, initiating family visits to battlegrounds in the Mid-Atlantic states, and drawing detailed pictures of soldiers and battle scenes. He was an active Boy Scout in elementary school, working diligently on scout projects. He was awarded a special badge for courage when he rescued a young boy who had fallen through the ice on a frozen pond.

David’s love of art, music, and film were what guided his aspirations. After a brief stint working for a U.S. congressman as an intern, he left Washington and only returned for brief visits. His travels took him all over the U.S. and Europe. It was in Paris that he met Denise Reymond, a textile designer, and his daughter, Jesmine, was born there in the early ’70s.

He returned to the U.S. in the late ’80s, starting college as an adult student at UNC. David and his mother, Grace, both graduated with bachelor’s degrees from UNC Chapel Hill in 1992. In Chapel Hill he worked for a time as sous-chef under mentor and friend Bill Smith of Crooks Corner.

He spent several years in the early part of this century living and working on the Vineyard. He was a warm, loving, caring friend, and his kindness touched the lives of those he met here. He holds a place in their hearts; the memory of his smile, his humor, and the twinkle in his eye will be held close by those fortunate enough to have known him.

David eventually moved to Durham, N.C., where he taught himself web programming and worked in a series of web design jobs, eventually at NCSU Urban Affairs Institute for the past eight years.

Becoming a father to twins at age 56 was perhaps the defining moment in David’s adult life. He put away his traveling shoes, and became a devoted father to Ethan and Sammy, partner to Tracy Gill, and caretaker to his mother, who suffered from dementia. He leaves also his sister, Camilla, his brother, James, 16 years his junior, his nieces, Melena and Mira, and a host of friends.