In an effort to foster intergenerational connection with Martha’s Vineyard’s senior citizens, Martha’s Vineyard Regional High School (MVRHS) students have been redecorating the Windemere Nursing and Rehabilitation Center, documenting residents’ stories about the feminist movement, and serving food at luncheons at the Center for Living.

During the holiday season, the student council visited the Windemere Nursing and Rehabilitation Center to decorate their living space. Sophomore class president Annabelle Biggs said, “I think the best thing about going to Windemere is student council getting to share what we do with others and the community, especially around the holiday season. It brings the [residents] of Windemere some happiness and excitement, and it brings happiness to us as we get to see their reactions to the decorations.”

Student body vice president Jack Holmes said, “Student council is all about building a happier community in and out of school. Visiting the elderly is a great way to do this.”

For more than 15 years, the school’s culinary program has cooked and served luncheons for the seniors of the Center for Living, an Island nonprofit organization that provides services for local senior citizens and the disabled. Culinary students rotate between preparing and cooking the food, taking orders, waiting on the attendees, and cleaning up. The menu usually consists of seasonal dishes and class projects, and attendees are charged $12 for three courses.

Culinary director Jack O’Malley said, “I think it’s good to expose the kids to live clients. They get to wait on the different people, and I think it’s a great activity. I don’t know how much time our students get to interact like that with people, and it’s something they all enjoy, and certainly our guests enjoy seeing the kids do the different jobs.”

Chef O’Malley was surprised at how well some of his students have performed: “There was a kid in culinary who I thought was in his shell, and he didn’t really say much, but when he was out in the dining room, he turned into a very charming person, and I was really surprised.”

Junior Thalita Neves recalled a scenario where she felt like she connected with the guests. “When I made the cream puff choux swan, they loved it so much, they wanted to meet the person who made it,” she said.

The women’s studies course, which teaches the history of women, has done work with the Center for Living as well. They have made two trips to the facility, once to socialize with the seniors, and a second time to interview them about women’s history. The idea for the project came from the monthly Give Back Day, a day where there is a community service opportunity, in November. The class was taken to the Center for Living for Alzheimer’s Awareness Month, a disease that’s more common among women. It was when all of the participants were in the same room that the idea was born. Women’s studies teacher Corrine Kurtz said, “It was quite a convivial atmosphere, and the possibilities became obvious to Mary Holmes [supportive day program supervisor of the Center for Living] and me.”

The students in the course are now working on their final projects, films about the women’s movement and its progress, with the help of Jenna Robichau and Brian Ditchfield from the Martha’s Vineyard Film Festival. Robichau and Ditchfield assisted with facilitating the discussions between the students and seniors, as well.

Ms. Kurtz thought that all of her students made a connection: “While some of the discussions were a bit more lively than others, I believe all the students connected in some way to the participants at the Center, and became attached to the stories they heard, as both listeners and historians. Their job now is to do some self-reflecting of their own, telling their own story.”

“I am fortunate to have a grandmother still,” said Ms. Kurtz, “94 [years old] and living on her own in rural Pennsylvania. The time I spend with her makes me keenly aware of the debt we owe those who came before us, or at the very least, some gratitude.” HSV 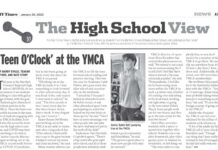 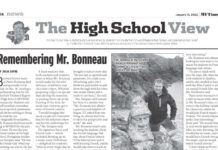 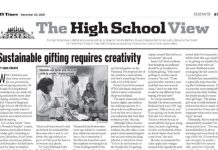