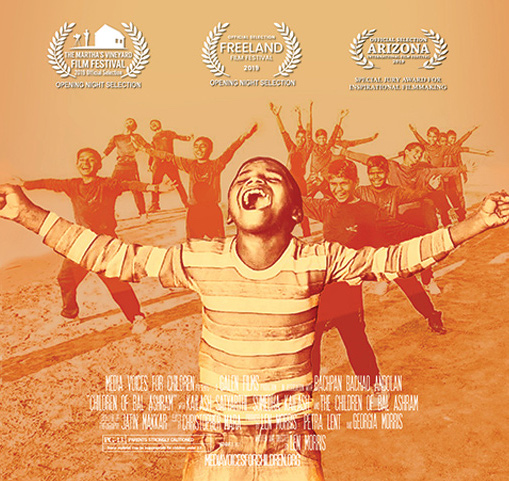 An art opening for a photographic exhibition, “Our Children,” will begin at 5:30 pm on Saturday, Jan. 18, at the Martha’s Vineyard Playhouse Art Space. The exhibit is sponsored by Media Voices for Children, and features gorgeous photographs of children worldwide and on the Vineyard by U.R. (“Robin”) Romano and Melissa Blythe Knowles, who curated the exhibit.

A screening of the documentary “Children of Bal Ashram” will begin at 7 pm, with doors opening at 6:30. After the film, which lasts a little more than an hour, a Q and A with the filmmakers, Len and Georgia Morris, will take place.

“Children of Bal Ashram” is a documentary on the life’s work of Sumedha and her husband, Nobel prizewinner Kailash Satyarthi, who together, a press release states, have rescued 88,000 children from bonded labor, trafficking, and sexual abuse.

In 1998, they founded Bal Ashram, a community in Rajasthan, India, where the children are taught that caste, gender, and class are meaningless. Bal Ashram gives the children back their stolen childhoods, the release says, and empowers them to go out into the world and fight for other enslaved children.

The film is produced and directed by Len Morris, co-produced by Georgia Morris and Petra Lent McCarron, and edited by Christopher Mara.

Suggested donation for the film is $10.