The Island’s first winter indoor pickleball tournament was played on the courts at Airport Fitness on Saturday, Jan. 11. The tournament was open to all, and 24 players played in three divisions: novice, intermediate, and advanced.

The tournament format was doubles round robin for eight players, allowing each player to play for 15 minutes before moving to the next round with a new partner.

Points that players won in each round were added together, with the highest score determining the winners. Susan Garrett took first place with 91 points in the novice division. Bob Gilpin won his round robin tournament in the intermediate with 88 points. The advanced bracket was a tie between Shawn Schofield and Brian Maxfield, who tied with 82 points. Ray Pierce came in third in the advanced bracket, with 79 points.

The next 2020 pickleball tournament is scheduled at Airport Fitness for Saturday, Feb. 9, at 9 am. 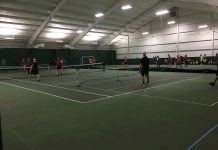 Pickleball, soccer, and futsal now also between the lines