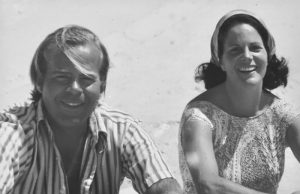 David Carlisle Thompson, age 84, died peacefully on Jan. 11, 2020, at his home on Fuller Street, Edgartown, following a period of declining health. He was grateful for the assistance of the compassionate team of nurses and skilled aides who made his last years comfortable.

David was born in Attleboro on July 31, 1935, to Rupert Campbell Thompson Jr. and Eleanor Ball Thompson. He graduated from Deerfield Academy in 1953, and from Dartmouth College in 1957, and he remained a lifelong supporter of both institutions. After serving as an executive at Stanley Works in New Britain, Conn., in the 1960s, he and his wife Joan moved to Martha’s Vineyard in 1973. He founded Vineyard Yachts, a boatbuilding company based in Tisbury, where he produced seaworthy and elegant runabouts. In the 1980s he established LandVest Real Estate in Edgartown, and for more than 30 years, he was a leading real estate professional on the Island. Throughout his boatbuilding and real estate careers, he was capably assisted by Joan, who organized their offices and kept David on track.

David was an avid outdoors enthusiast who embraced New England’s four seasons. He was an expert golfer, skier, waterfowl hunter, boater, and fisherman. He served as president of the Edgartown Golf Club from 1986 to 1992. He was a dedicated conservationist and longtime supporter of The Trustees of Reservations, Ducks Unlimited, and Sheriff’s Meadow Foundation. He was also a member of the Edgartown Yacht Club and the Edgartown Reading Room. As a life trustee of the Martha’s Vineyard Preservation Trust, he and his colleague Ted Farrow initiated the acquisitions of 15 of the Island’s endangered landmarks.

He was predeceased by his brother, Peter Campbell Thompson and by Joan Palma Thompson, his beloved wife of 40 years. He is survived by his nephews, Andrew Thompson of Dover and Christopher Thompson of Darien, Conn., and their families. David also leaves many good friends who cared deeply for him, and who assisted with his care.

Prior to his marriage to Joan Palma Thompson, he was married to Alice Jane (“AJ”) Thompson. Following Joan’s death, he was briefly married to Anne P. Billings of McKinney, Texas; both of these marriages ended in divorce.

There will be a memorial service in celebration of David’s life at 11 am on Saturday, March 14, at St. Andrew’s Church, Edgartown.

In honor of his loyal feline companions, contributions in David’s name may be made to the Animal Shelter of Martha’s Vineyard, P.O. Box 1829, Edgartown, MA 02539.