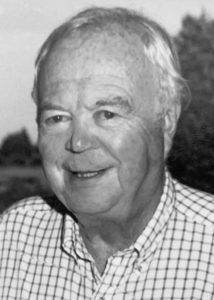 His life began on May 31, 1926, in Springfield, the first of four children born to Constance Mumford and David G. Dutton. Soon after, they moved to Poughkeepsie, N.Y., where Dave’s father was president of the A.C. Dutton Lumber Corp., a family business with facilities up and down the East Coast, and one of the first businesses to pressure-treat wood products.

Dave attended the Poughkeepsie Day School and, subsequently, the Hotchkiss School in Lakeville, Conn. Upon graduation, he joined the Navy’s V-5 Aviation Training Program, and was sent to Wesleyan University to continue his training. While in the Navy, he served on the USS Raymond, as well as the USS Silverstein. When the war ended, he was discharged, and attended Williams College for further education.

In 1949, Dave met Barbara McDowell on the shore of Cream Hill Lake in Cornwall, Conn. Their attraction was instantaneous, and lasted for more than 70 years. Married in July 1950, they would eventually raise four sons: David, Allan, John, and Robert. In the late 1960s and early ’70s, the family split their time between Poughkeepsie and their beloved Vineyard home in Harthaven. During those years, Dave was elected as leader of the NBMDA, a national lumber wholesalers association, while serving as president of the Dutton family business, which was eventually sold, giving him the ability to move his family to the Vineyard year-round.

In 1976, he started an Island business based on what he knew best: building materials. Islanders will remember him best as the owner of Dutton’s Home Center (“Do Something Constructive”), located on State Road in Vineyard Haven. For two decades, he regularly dispensed wit and wisdom, and the store became a place where people would come to hang out, pick up building supplies, get a DIY lesson, or enjoy a story.

Throughout his life, Dave explored his many interests. In the 1960s he earned a pilot’s license, and flew his single-engine Cessna airplane in and out of Tradewinds Airport in Oak Bluffs. Dave was a dedicated casual golfer, elected to the Oak Bluffs finance committee, and was a one-term president of the Harthaven Association. After selling the Home Center, Dave took to traveling in an RV, earning the moniker of “Camper Dave,” regularly visiting Nova Scotia, but also taking journeys West, making it to both Alaska and California.

Dave is survived by his wife Barbara and their four sons, David (and wife Renee and son Stanley) of Vineyard Haven, Allan (and wife Bianca and son Allan Lourden) of Jamaica Plain, John (and daughter Chloe) of Las Cruces, N.M., and Robert (and wife Molly Conole and children Amelia and Simon) of Oak Bluffs.
No public services will be held.