The Neighborhood Convention for February will be held on Tuesday, Feb. 4, at 11 am at the First Congregational Church in West Tisbury. The program is Focus on Youth and Faith, led by Stoddard Lane-Reticker. Bring a brown bag lunch. Beverages and dessert are provided by the host church. Everyone is welcome to come.

Have Faith: Hold on

Have Faith: Spirituality and addiction 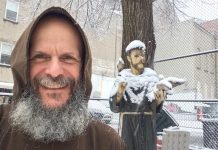